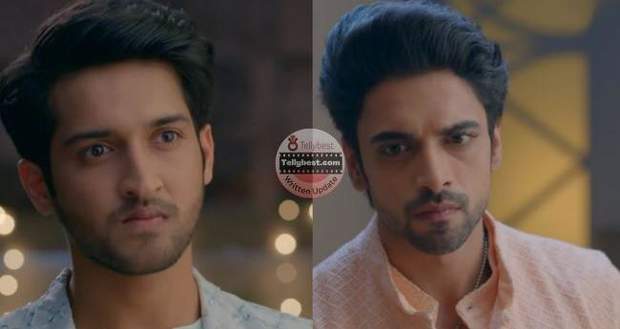 Today's Faltu 26th November 2022 episode starts with Ayaan telling Rijula and Alok that he will make sure Faltu goes on to make her dreams come true as he knows that she is made for greatness.

Seeing him talk about Faltu in such a way, Rijula asks Ayaan if he is happy with his marriage arrangement with Tanisha.

Ayaan says that knows he will be happy since it is Janardan's decision and leaves the topic at that.

Later, the Mittal family arrives at Rijula's house and she opens the door thinking that it must be Ayaan who forgot something.

However, Rijula opens the door and gets shocked to see the Mittal family at her front door.

Sumitra asks Rijula if Ayaan was there and Rijula lies that she was talking to Ayaan on call.

Meanwhile, Alok closes the door where Faltu is sleeping so that nobody sees them.

However, Sid gets a call and he goes to that room while Rijula and Alok run after him so that Faltu is not discovered.

Sid opens the door and finds it empty while Rijula and others run after him.

Meanwhile, Ayaan is seen holding the sleeping Faltu in his hands and hiding out on the balcony.

Flashback shows Ayaan seeing his family members and climbing the balcony to Faltu's room to save her.

Back in the present, Rijula and Alok also get surprised to see the room empty while Sid questions them about the medicines lying on the table.

Rijula again makes up an excuse that the medicines are expired and that the room is an isolation room for when they are sick.

The family leaves the room while Sid gets a call from Pappi asking him where he is.

Pappi inform Sid that he has arrived in the city while Sid tells him to wait as he will meet him when he is free.

Further, Ayaan tries to silence Faltu who keeps talking and gets the attention of Sid.

However, before Sid can figure out what is happening, Govardhan comes there asking him to do something since Rijula is still hesitant to attend the wedding.

Further, Sid leaves with Govardhan lying that he was busy talking to a client on call.

Sid thinks that observing Rijula and Alok, he is sure they know about Faltu's location.

On the other hand, Ayaan and Faltu stay in a very intimate position not wanting to be caught by the family members.

Later, the Mittal family tries to persuade Rijula to attend the wedding but Rijula looks hesitant.

Dadiji says that she wants to see her family together as she doesn't know which day will be her last and starts shedding a few tears.

Alok tells Rijula that he can not bear to see Dadiji crying and tells the Mittal family that he and Rijula will attend the wedding.

Once the family leaves, Ayaan comes out of the room and informs Bua and Fufaji that he returned to save Faltu after seeing his family members coming towards their home.

He wonders who would have brought the family there to convince them to invite them to the wedding.

Alok states that it must be Sid while Rijula recalls how Sid has a habit of meddling in other people's business.

Further, they wonder what to do with Faltu since they cannot leave her alone at home due to the fear of Pappi and also cannot take her to Ayaan's wedding.

Alok suggests introducing Faltu as a guest while Ayaan seems hesitant about the idea.

© Copyright tellybest.com, 2022, 2023. All Rights Reserved. Unauthorized use and/or duplication of any material from tellybest.com without written permission is strictly prohibited.
Cached Saved on: Saturday 26th of November 2022 11:39:37 PMCached Disp on: Tuesday 6th of December 2022 12:45:03 PM