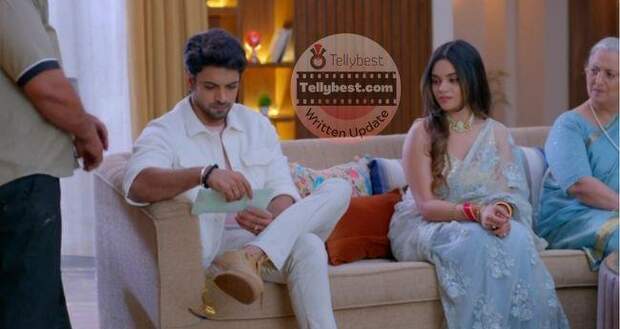 Today's Faltu 27th January 2023 episode starts with Tanisha asking Ayaan if he does not want to go on the honeymoon to which Ayaan replies that he is just upset about the fact that Janardhan has given all the marts to Sid.

Tanisha gets happy on hearing the news and then asks Ayaan to completely devote his time to her in Switzerland.

Meanwhile, Lajwanti gets up in the middle of the night when everyone else is sleeping and starts packing a tiffin, and then goes out of the house.

She goes to her boyfriend Amar who hugs her happily after which Lajwanti hands over the tiffin to him.

Faltu wakes up and finds Lajwanti missing on her side of the bed.

After a while, Lajwanti comes back which alerts Faltu’s senses but she remains quiet.

Back at the Mittal house, Ayaan opens the Pendrive and finds a video of a donkey drinking water.

Tanisha angrily goes to Sid and blames him for sending the pen drive to Ayaan because he is one of the only two people who know the truth about Faltu.

Tanisha throws the real Pendrive in front of Sid and starts asking him why he did what he did.

Sid starts his spot-on acting and swears friendship and everything else that he is not behind this.

Tanisha then shifts her blame to Charan and Pratap to which Sid replies that it can be Faltu too.

Tanisha apologizes to Sid for not trusting him to which Sid replies that he will always be there for her no matter what and will also find the person behind the pen drive.

After Tanisha leaves, Sid thinks to himself that from now onwards he has to be more careful.

Meanwhile, Jamuna seeks Faltu’s forgiveness because she has never let Faltu pray in the pooja while they were at Ittarpur because she considered Faltu an omen of bad luck.

After a while, Jamuna asks Faltu if there is Sindoor in the house because she needs it in the Pooja to which Faltu stammers and says that how would she have Sindoor as no one in the house used it before they came.

Lajwanti finds Faltu’s sindoor bottle and goes to her to confront it in front of Jamuna and Pratap.

Jamuna asks Faltu why she lied about having a sindoor bottle.

Faltu gets very nervous and Pratap starts thinking about all the past incidents that had taken place and says to Faltu why did she not return Madhuri’s bottle of sindoor.

Meanwhile, Ayaan goes to the eye hospital along with his subordinate to find out who is behind Faltu’s eye treatment cost coverage.

Ayaan asks a staff working in the hospital to give the information on Faltu’s donor because he is afraid that Faltu and her family have to opt for the wrong way to gather the money for the operation.

The staff agrees and takes Ayaan to check the records of the donors.

© Copyright tellybest.com, 2022, 2023. All Rights Reserved. Unauthorized use and/or duplication of any material from tellybest.com without written permission is strictly prohibited.
Cached Saved on: Saturday 28th of January 2023 12:03:00 AMCached Disp on: Thursday 2nd of February 2023 09:00:37 PM