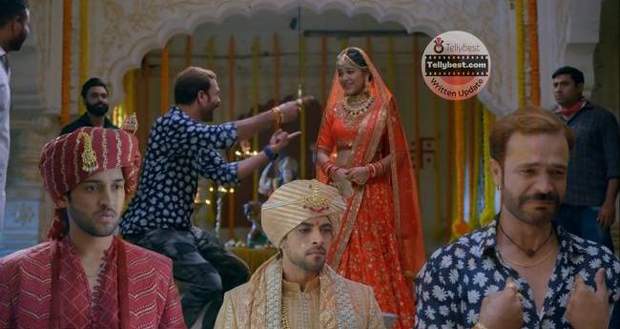 Today's Faltu 28th December 2022 episode starts with Faltu threatening to blow Pappi's brains if any of the goons come closer.

Meanwhile, Ayaan talks to his man who informs him that the police will take half an hour to reach there.

At the same time, Pappi knocks the gun out of Faltu's hand while she's distracted talking back to his goons.

As the goons are about to attack Faltu, Ayaan comes there and saves her.

Back at the Mittal house, Kanika is worried while Tanisha keeps on trying to calm him.

However, Sumitra and Sid come there and instigate Kanika against Ayaan with their talks.

Sid tells Kanika that he will readily marry Tanisha while Tanisha says that nothing like that will happen.

Tanisha leaves while Sumitra sits opposite Kanika and tells her that she cannot see Tanisha being humiliated and has made a decision.

Sumitra says that if Ayaan does not arrive on time, Sid will sit in the mandap and fake argues with Sid who 'reluctantly' agrees.

When they see doubt still on Kanika's face, Sumitra reminds her that Janardan had promised to hand over the shares to Sid if Ayaan ever breaks his trust.

Back at the temple, Faltu and Ayaan help each other fight the goons while arguing with each other.

Faltu tells him that he should not have left his marriage while Ayaan tells her that he could not step back from his responsibilities.

Meanwhile, at Ittarpur, Angoori and Ratan prepare for Faltu's wedding while Jamuna and Laajwanti convince Charan to go to Mumbai.

Pratap tells Charan that he will come with him to Mumbai and they leave.

Back at the temple, the goons tie up Ayaan to a pillar while Faltu begs Pappi to let him go.

She tells him that she will even marry him willingly if he lets Ayaan go.

Ayaan tries to stop Faltu while Pappi questions Ayaan about what magic he has done on Faltu and she keeps taking his name.

Faltu sits in the mandap and tells Pappi to let Ayaan go.

However, Pappi puts forth a condition that he will marry in front of Ayaan while Ayaan tells Faltu that she cannot let go of her dreams to marry such a leech person.

Faltu hesitates as she recalls the times she was judged by society for doing things while being a girl.

Pappi counts down while Faltu finally agrees that she will marry him.

However, that is only if Pappi promises to let Ayaan go unharmed.

Pappi agrees and sits in the Mandap while telling the Pandit to wear a helmet for his safety and not stop the Mantras until the marriage is complete.

As the marriage is being done, Ayaan manages to overpower the men and releases himself from the rope as he starts fighting with the goons.

© Copyright tellybest.com, 2022, 2023. All Rights Reserved. Unauthorized use and/or duplication of any material from tellybest.com without written permission is strictly prohibited.
Cached Saved on: Wednesday 25th of January 2023 10:10:00 AMCached Disp on: Wednesday 1st of February 2023 06:47:35 PM