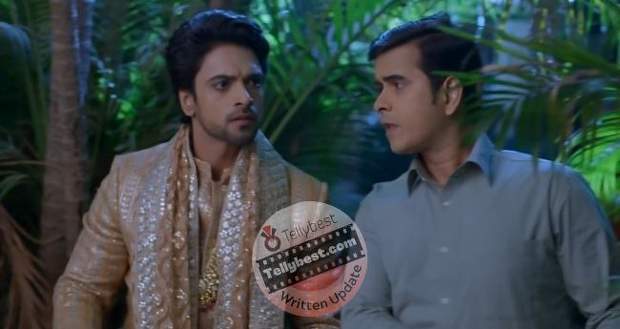 Seeing Pappi use force on Faltu, Aayan frees himself and beats all of Pappi’s goons.

Aayan shrugs the gun out of his hand and grabs Pappi’s neck and screams at Pappi to let go of Faltu’s hand.

Angrily Aayan punches Pappi and tells Faltu that his promise is more important to him than his own life.

At the same time, Pappi call his other men and Aayan starts to beat them all by taking rounds of the Agni Kund.

From behind Pappi hits Aayan with a rod on his head rendering Aayan a little unstable, he attacks again but this time Aayan kicks him.

In the background, Police sirens become audible and Pappi along with his men run away and Aayan falls down.

Faltu keeps screaming Mart Sahab (Aayan) until he loses consciousness but before that Aayan tries to push Faltu away.

While he pushes Faltu, the kumkum in Aayan’s hand gets on Faltu’s head and as she sees her reflection in the water she realizes what Aayan has done.

Meanwhile, Janardhan asks Savita for his brother to get updated on Aayan’s situation.

She tells Janardhan that his brothers are managing the guests and the police must have arrived at the temple.

Kanika storms in and threatens Janardhan and Savita that she will destroy everything if Tanu’s heart gets broken.

At the temple, Faltu’s vision starts getting blurry and she remembers what the doctor told her.

Faltu roams around screaming Aayan’s name as she loses her sight and she stumbles into a pillar and gets knocked unconscious.

Meanwhile, Tanu tries to calm Kanika and tells her that she trusts Aayan completely and Kanika need not worry.

Siddharth tries to butter angry Kanika and Savita goes to talk to Harsh.

Later at the temple, the police see Aayan but there is no sight of Faltu so the police carry Aayan into the car leaving Faltu behind as she could not be found.

At the wedding, Harsh tells their guests to enjoy themselves as the wedding will start soon and later Savita tells him about Kanika’s threats so he calls the police immediately.

The police carry Aayan in their car and Aayan regains consciousness and asks them to return to the temple for Faltu but they take him straight home.

On the other hand, Sid calls Pappi and finds out what happened, and then he tells Pappi to lay low for some time.

Later, Harsh tells everyone that Aayan is coming soon while some worry about Faltu but Janardhan and Kanika says that this Faltu chapter is closed.

At the same time, Aayan arrives and tells everyone all that happened while continuously worrying about Faltu.

© Copyright tellybest.com, 2022, 2023. All Rights Reserved. Unauthorized use and/or duplication of any material from tellybest.com without written permission is strictly prohibited.
Cached Saved on: Wednesday 25th of January 2023 09:51:30 AMCached Disp on: Tuesday 31st of January 2023 07:47:25 PM