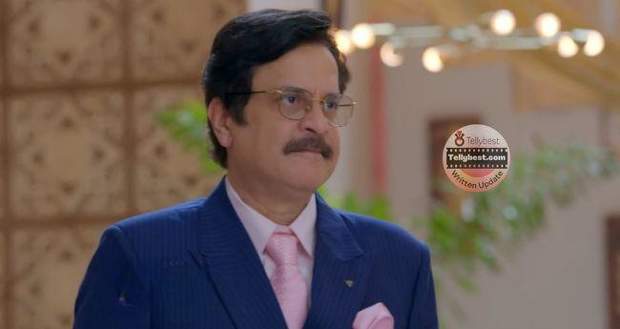 Today's Faltu 29th November 2022 episode starts with Rijula and Alok asking Faltu to accompany them to Ayaan's wedding but she denies.

Rijula gets shocked while Faltu states she is not afraid of Pappi and will beat him with a stick & hand him over to the police.

Rijula questions Faltu about her changed behaviour toward Pappi while Faltu says that she doesn't want to be a trouble for Ayaan anymore.

However, Alok & Rijula softly make her understand that Ayaan cares deeply for her and they cannot leave her alone at the house.

Meanwhile, Ayaan gets scolded by Tanisha who says he is more invested in his work than in their marriage.

Ayaan reminds Tanisha that they spent the whole day together while Siddharth sees them together and gets jealous.

Ayaan and Tanisha start to practice their wedding dance while he gets lost in Faltu's thoughts.

Tanisha loses her balance but gets saved from falling while Siddharth plans to expose Ayaan.

Tanisha complains to Janardhan that Ayaan's focus is not on the dance.

Janardhan laughs and states that it will take some time for Ayaan to catch up with the steps since his mind has always been involved in business.

On the other hand, Pappi reaches Rijula'a house with Ratan and is not able to break open the lock.

Meanwhile, Rijula and Alok travel in the car to Mittal's House.

Faltu gets surprised seeing the tall buildings and asks Alok how can one climb so high.

Rijula explains to Faltu the concept of lifts while Faltu promises to make one high building too.

In between, they stop the car to buy some sweets and Faltu gets Ayaan's call just then.

Faltu reminds Ayaan to realise how much everyone loves him.

After cutting the call, Faltu sees some kids playing cricket happily but gets angry when she sees Janardhan'a driver come out of his car and scold the kids.

Faltu lectures the driver about his rash behaviour while Janardhan comes out and gets into a conflict.

The driver tries to push Faltu away who falls down and throws mud at Janardhan.

Later, Faltu, Rijula, and Alok reach the Mittal House where everyone is already shocked to see Janardhan's court dirty with mud.

Ayaan tells Janardhan that he will teach a lesson to that ill-mannered girl.

© Copyright tellybest.com, 2022, 2023. All Rights Reserved. Unauthorized use and/or duplication of any material from tellybest.com without written permission is strictly prohibited.
Cached Saved on: Wednesday 25th of January 2023 10:19:24 AMCached Disp on: Thursday 2nd of February 2023 08:09:55 PM