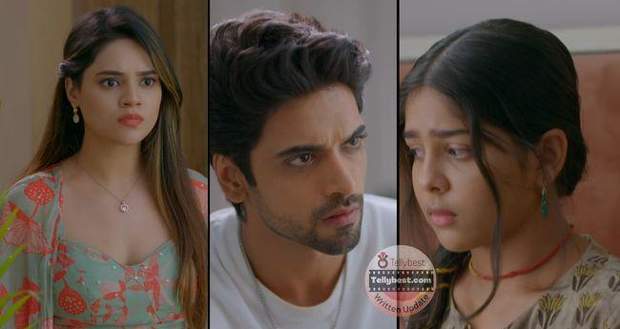 Today's Faltu 2nd December 2022 episode starts with the Mittal family practicing for the Sangeet while Tanisha shouts to stop it.

She tells the dancer that she wants to dance to a pure Rajasthani Folk song to impress Janardan and Dadi and make them remember their childhood memories.

Just then, Su comes there with Faltu and tells everyone that Faltu will teach them the Pure Rajasthani dance.

She and Ayaan get into a quarrel over who is the better dancer and end up in a challenge against each other.

While dancing, Ayaan sees Faltu's distracted expression and asks her what the problem is while Faltu tells him that she has some time to tell him.

On the other hand, Sid instigates Tanisha saying that she should have more chemistry with Ayaan than Faltu.

Tanisha tells Faltu to teach her and Ayaan from far away while Faltu keeps on thinking about talking to Ayaan alone.

However, the whole day passes by without Faltu getting a chance to talk to Ayaan.

At night, Faltu calls Ayaan but his phone is switched off as Faltu prays to not have any obstacles in his wedding.

The next day, everyone is busy preparing for the Heena function while Kanika and Tanisha come saying that they are getting late.

Ayaan comes downstairs and Faltu tries to talk to Ayaan while she goes and greets Kanika.

Tanisha argues that Faltu does not need to come to the temple with them as it is a family function only.

However, Dadi and Savita say that Faltu is a part of the family and tells the family to take blessing from the temple inside the house.

Faltu stops Ayaan as everyone leaves and tells him that Pappi is here.

Just then, the shouts of Pappi and Ratan are heard throughout the house which worries both Faltu and Ayaan.

Ayaan tells Faltu to hide behind the pillar and not come out while he goes and tells the family to call the police as they are thugs.

However, Sid intervenes in their drama as he fake fights with Pappi while Pappi says that Ayaan helped Faltu elope from the marriage home.

Faltu comes out of hiding and tells the family that she eloped but not with Ayaan.

Afterward, Pappi starts his drama and cries telling the Mittal family that he is just there to take his would-be wife.

He tries to drag Faltu out of the house while Ayaan holds his hands while removing Faltu's hand ordering Pappi to keep both his hands and voice low.

Tanisha and Kanika tell Ayaan to not interfere in Faltu's matter as she is not a part of their family.

Tanisha calls Faltu cheap while Ayaan stops her and calls her pathetic for thinking such a thing.

© Copyright tellybest.com, 2022, 2023. All Rights Reserved. Unauthorized use and/or duplication of any material from tellybest.com without written permission is strictly prohibited.
Cached Saved on: Wednesday 25th of January 2023 05:18:47 PMCached Disp on: Wednesday 1st of February 2023 10:13:51 PM