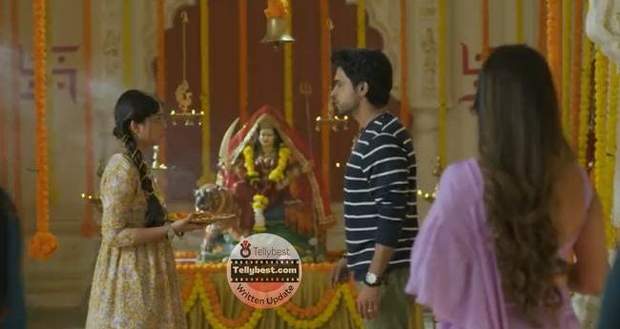 Today's Faltu 2nd January 2023 episode starts with the Mittal family having dinner together.

Tanisha announces that Faltu has been found and is on her way to the house.

Kanika interjects and says that it is a good thing that Faltu has been found but there is no need to call her home as it will only add up to the chaos.

Tanisha says that it will just be for a single night, after which Faltu can live in a hostel at Kanika's academy.

Harsh gets a call from the police station and finds out that Faltu has escaped from the station.

Meanwhile, Faltu is alone and struggles to cross the road.

As she crosses the road, she remembers the golden memories of her father and misses him.

Back at the Mittal's house, Harsh tells Ayaan that Faltu's eyesight is also compromised.

Ayaan replies that it is not possible since they were together a few hours earlier and at that time her eyesight was fine and there must've been some confusion.

Kanika snaps and says that it is not possible to confuse Faltu with another girl because of her weird name and the bridal attire.

Meanwhile, back on the road, Faltu stumbles in front of a car.

The man driving the car finds out that Faltu is blind and thus lies to her that he is driving with his family.

Faltu asks him to take her to the hospital.

The man gets happy and says that he will take her to the hospital and holds her hand to take her to his car but at that exact moment, a woman arrives and stops Faltu from entering his car.

The woman pretends to know Faltu so that the man would leave her as his intentions were not pure.

The woman tells Faltu that the man was lying about being with his family members.

Faltu thanks the woman for saving her.

Back at the Mittal's house, Siddharth says that Faltu is an expert at manipulating facts, and that she will only bring shame to the Mittal family.

Kanika also supports Siddharth and says that Faltu is not as pure as Ayaan thinks she is.

Kanika continues to say that Faltu just wants to gain Ayaan's attention and has planned everything.

Ayaan raises his voice and asks Kanika to stop.

Janardhan breaks his silence and scolds Ayaan for raising his voice at Kanika and tells him to understand his priorities.

Meanwhile, a woman and a man join Faltu and the other woman.

They decide to help Faltu by taking her to the hospital.

Concurrently, Charan and Pratap finally charge their phone and receives a call from the police station. The police tell them everything.

Meanwhile, Faltu reaches the hospital and asks the woman who helped her to call her father.

This time Charan picks up the call.

Faltu tells Charan everything and also tells him where she is.

Faltu also asks Charan, not to tell the police or the Mittals about her whereabouts.

© Copyright tellybest.com, 2022, 2023. All Rights Reserved. Unauthorized use and/or duplication of any material from tellybest.com without written permission is strictly prohibited.
Cached Saved on: Wednesday 25th of January 2023 09:02:30 AMCached Disp on: Tuesday 31st of January 2023 07:38:25 PM