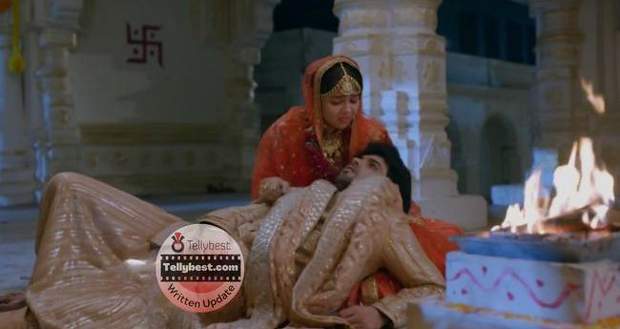 Today's Faltu 30th December 2022 episode starts with Faltu sitting anxiously under a tree because she has lost her eyesight and does not know where to go.

She cries to herself that she can't lose her eyesight at such a crucial moment, but at the same time keeps wondering about Ayaan's well-being.

Faltu feels grateful for everything that Ayaan has done for her and keeps telling herself that she will never go back into Ayaan's life and put him and his family in trouble.

Meanwhile, at the Mittal's house Harsh and Govind escort Ayaan to the Mandap where Tanu is sitting and waiting for him to come.

Ayaan wonders to himself if Faltu intentionally left the scene for his sake.

Janardhan tells Ayaan that he feels proud to be his father and then the wedding rituals begin.

The Priest announces that it was time for the couple to take rounds.

Ayaan and Tanisha get up and start taking rounds around the fire.

Everyone throws flower petals at them, but Ayaan still stays lost in his thoughts which bothers everyone.

Concurrently, Faltu senses that she is closer to a road and moves in the direction of the noises.

She is aware that Pappi and his goons are on the lookout for her and therefore she has to be careful.

She finally finds the road and after struggling a lot manages to cross it as well.

Meanwhile, at the wedding, Everyone is getting annoyed by Ayaan as he keeps delaying the ritual of filling the sindoor in Tanisha's head.

Kanika keeps complaining about how absentmindedly Ayaan is behaving.

Kanika then turns to Ayaan and says that she is damn sure that Faltu has run away with Pappi for money.

Ayaan gets infuriated at Kanika's words and defends Faltu.

After a lot of chaos, Ayaan finally the sindoor in Tanisha's head, and the wedding rituals come to an end.

The priest announces Ayaan and Tanisha as husband and wife.

Meanwhile, Faltu reaches a highway restaurant and overhears a couple of men who sounded decent talking about their daily lives.

Faltu thinks to herself that the men sounded genuine and goes to them for help.

The two men offer her water and ask her if she's blind.

Faltu asks them to call her father.

Back at the house, Rijula looks at Ayaan and thinks to herself that Ayaan is not happy with the marriage as his heart is in another place.

Ayaan is very worried about Faltu, and Harsh consoles him.

Ayaan tells Harsh that he needs to go back and protect Faltu but Harsh stops him.

Harsh reveals that he has already sent his men to the site but there is no evidence of Faltu and there is a slight possibility that she might have run away with Pappi.

Ayaan breaks down and starts crying, he keeps saying that he has let down Faltu and her father as he couldn't keep his promise of protecting her.

© Copyright tellybest.com, 2022, 2023. All Rights Reserved. Unauthorized use and/or duplication of any material from tellybest.com without written permission is strictly prohibited.
Cached Saved on: Wednesday 25th of January 2023 02:15:08 PMCached Disp on: Tuesday 31st of January 2023 06:08:12 PM