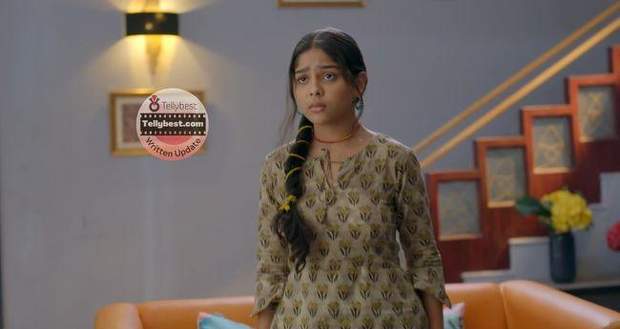 However, Alok and Rijula state that they have something to inform them of and bring Faltu inside.

The family members get shocked to see Faltu while Tanisha recognizes her as the girl who had danced with Ayaan.

She calls Faltu out while Su also agrees and asks Faltu if she eloped from her arranged marriage with Pappi and came to Mumbai.

Ayaan also acts surprised and tells Faltu that he had no idea she was in Mumbai.

Faltu thinks that Ayaan is a great actor and continues with her act as she tells the family members that she was escaping from some goons when she met Rijula and Alok.

Sid thinks that Ayaan formed a good story but he will be the one ending the story by writing the climax of it.

Faltu greets everyone by doing namaskar while Tanisha mocks her by asking her if she does not know how to shake hands.

Janardan comes downstairs and gets shocked to see Faltu while demanding she gets out of the Mittal house.

Rijula connects the dots as she comes forward and supports Faltu in front of Janardan.

Meanwhile, Dadi goes to the kitchen to make Halwa for Rijula and Alok while she accidentally keeps the gas on while looking for matchsticks.

However, Janardan calls her mannerless and demands Ayaan kick Faltu out of the house.

Later, they get shocked as they hear Dadi's screams and rush to see what the problem is.

Faltu sees that the end of the saree's dupatta is burning and saves Dadi while injuring herself.

The family hugs a scared Dadi while Ayaan notices the burn mark on Faltu's hand and saves her.

Further, Dadi thanks Faltu for saving her life while Faltu says that she should go.

Rijula and others try to stop her while Dadi stops her and tells Faltu to stay at the Mittal house.

Janardan agrees to let Faltu be a guest there until Ayaan's marriage and leaves telling Faltu that his opinion of her has not changed.

Later, Ayaan goes to Faltu's room with a first aid kit and cleans up her wounds while telling her to not talk about cricket inside the Mittal house.

Faltu gives him the whole scenario as to what happened in the market with Janardan and apologizes to him.

However, Ayaan tells them to not worry about it since he will figure it out and continue aiding her injury.

Just then, Tanisha comes there and angrily calls out to Ayaan seeing him helping Faltu.

© Copyright tellybest.com, 2022, 2023. All Rights Reserved. Unauthorized use and/or duplication of any material from tellybest.com without written permission is strictly prohibited.
Cached Saved on: Wednesday 25th of January 2023 03:17:04 PMCached Disp on: Thursday 2nd of February 2023 08:38:30 PM