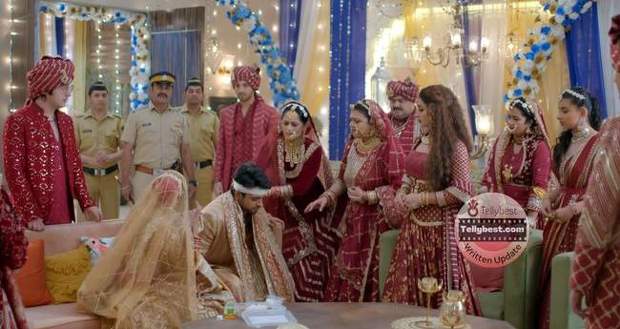 Today's Faltu 31st December 2022 episode starts with Janardhan asking Ayaan if he's okay or not while Mayawati and Harsh are present in the room as well.

Janardhan then says that Ayaan should let Faltu live her life the way she wants, as she is not their responsibility and Ayaan should only focus on his wife, business, and his new life.

Rijula goes to Ayaan when Janardhan, Harsh, and Mayawati leave.

Rijula senses the tension in the atmosphere and asks Ayaan what is bothering him.

Ayaan tells Rijula that he faintly remembers sindoor in Faltu's head before he passed out.

Rijula is shocked and says that he must have hallucinated it because it is not possible.

Ayaan thinks to himself whether he was the one who filled the sindoor in Faltu's head.

Meanwhile, at the highway, Faltu asks the strangers to help her, but the strangers feel that she is trying to trick them to rob them afterward.

After a lot of convincing, the group of strangers agrees to take her to the nearest police station as she can get all the help she wants from there.

Meanwhile, at the Mittal house, Tanisha sees off all the guests when Kanika enters and angrily complains about the manners of the Mittals that how they have left the newly married bride alone to attend to the guests.

Tanisha asks Kanika to calm down and tells her that Ayaan is a good person and that Kanika should also trust him.

Back at the highway, the strangers escort Faltu to the police station. A female constable asks Faltu to tell everything in detail to her.

Faltu says that she will tell her everything but first asks the constable to call Faltu’s father but when he was called, his phone was coming switched off.

The female constable is enraged and asks her fellow officers to take Faltu away because she thought that Faltu gave her the wrong number intentionally to divert their attention.

However, as they are about to leave, the constable gets a call from a superior officer who tells her that a girl named Faltu Singh is missing and has relations with the Mittal family.

The female constable immediately calls Faltu back and offers her a seat.

She asks Faltu why did Faltu not tell her she has relations with the Mittal family.

Hearing this, Faltu decides to run away from there because no matter what, she does not want to trouble Ayaan.

Meanwhile, at Mittal's house, Tanisha and Ayaan are alone in their room.

Tanisha tells Ayaan that the police have found Faltu.

Hearing this Ayaan gets very happy and excited and thanks Tanisha with a hug.

Tanisha then takes him downstairs for dinner.

Back at the police station, Faltu asks a female officer where the washroom is with the intention to escape through there.

On her way outside, she keeps bumping into walls and objects and after a lot of struggles, she finally finds her way out.

The female constable asks for Faltu as a car has come to pick her up, but she soon realizes that Faltu has already escaped from the police station.

© Copyright tellybest.com, 2022, 2023. All Rights Reserved. Unauthorized use and/or duplication of any material from tellybest.com without written permission is strictly prohibited.
Cached Saved on: Wednesday 25th of January 2023 01:57:40 PMCached Disp on: Tuesday 31st of January 2023 06:45:28 PM