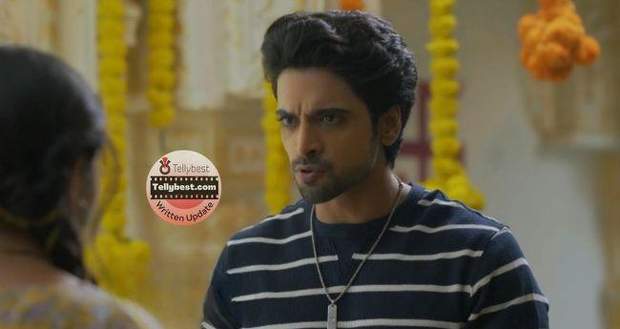 Today's Faltu 3rd January 2023 episode starts with Faltu going inside the hospital and on her way, she bumps into a number of things.

Faltu then asks a nurse to take her to the doctor to which the nurse replies that there are no eye specialists present at that moment.

Faltu requests the nurse to take her to any doctor that is present over there.

Ayaan is worried for Faltu

Meanwhile back at the Mittal's house, Ayaan is in a dilemma as he doesn't know why Faltu ran away from the police station.

Harsh enters and assures Ayaan that they will find Faltu at all costs.

Back at the hospital, the doctor tells Faltu that she needs to be admitted in the general ward.

Faltu asks the doctor if she will get her eyesight back as she has to play cricket and earn a lot of fame for her father.

The doctor tells Faltu that there is a chance that her eyesight will be back, but the treatment will be expensive and there is no 100 percent guarantee of the success rate because blood circulation has stopped in her eyes making it a very complicated case.

Meanwhile, at the Mittal's house, Ayaan remembers the times when he used to teach Faltu cricket and misses her.

Savita asks Ayaan to give time to Tanisha

Savita arrives and tells him that she has never seen him so restless in her entire life. She explains to Ayaan that he needs to get over Faltu and enjoy these initial moments of his marriage.

Savita says that Tanisha is a very good wife because she loves Ayaan and has been taking care of him.

Savita tells Ayaan that it is his responsibility to make this wedding work for the sake of Janardhan. Janardhan has done a lot of things for Savita and Ayaan and if it weren't for him, Savita wouldn't be alive.

Ayaan replies that he will always keep his father's head up and be a good husband to Tanisha as well.

After Savita leaves, Ayaan thinks to himself that he is scared that the worst has already happened since there is something going on between Faltu and him.

Doctors doubt Faltu to be a runaway bride

Back at the hospital, a senior doctor arrives and starts complaining to the doctor who has admitted Faltu that Faltu's case looks like a police case, and he should have informed the police before admitting her.

Faltu tells the female doctor that she is in bridal attire because she works for a drama club.

Faltu says to the doctor that her father is going to arrive soon, and she can ask the remaining questions from him.

Meanwhile, at the Mittal's house, Janardhan calls for Ayaan and Tanisha as it is time for the post-wedding rituals.

Kanika tells Janardhan that she wants to take Ayaan and Tanisha to her house for the Pag Phere ritual.

Janardhan and Savita agree while Tanisha and Ayaan join them.

Janardhan gives Tanisha a lot of cash and asks her to distribute it amongst all the family members as it is her responsibility to manage the finances of the family.

Tanisha reluctantly says that she is not a good fit for this role because whenever she wanted anything, Kanika would give her a credit card.

Ayaan says that he believes in Tanisha and knows that she will be able to do this job.

Back at the hospital, the senior doctor whose name is Asha takes Faltu to freshen up.

Asha tries to clean the sindoor filled in Faltu's head.

Faltu tells her that she will remove the sindoor herself and asks Asha to leave because she wants to go to the washroom.

After Asha leaves Faltu thinks to herself that she doesn't want to remove Ayaan's sindoor from her head.

So, she opens her hair and puts the sindoor at the side of her head and hides it by her hair.

Meanwhile, at the Mittal's house, Tanisha distributes the money among all the family members.

Back at the hospital, two patients are fighting for an apple, Faltu takes the apple from their hands and asks them to shut their eyes.

The patients shut their eyes after which Faltu takes an apple from her plate and gives one to each patient.

Asha thinks to herself that she was doubting Faltu for no reason as she seems to be a good girl.

© Copyright tellybest.com, 2022, 2023. All Rights Reserved. Unauthorized use and/or duplication of any material from tellybest.com without written permission is strictly prohibited.
Cached Saved on: Wednesday 25th of January 2023 09:17:27 AMCached Disp on: Monday 6th of February 2023 06:16:55 AM