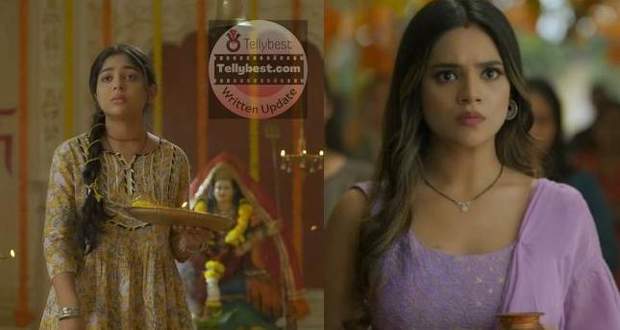 Today's Faltu 4th January 2023 episode starts with Charan and Pratap reaching the hospital while Faltu breaks into tears on hearing them.

Charan then asks Faltu if it is true that her eyesight has gone and she nods.

Meanwhile, at the Mittal's house, everyone has gathered for the post-martial rituals. Ayaan and Tanisha are supposed to find a ring in the milk but Ayaan remains lost in his thoughts.

Back at the hospital, the nurse tells Charan about her wedding attire and Sindoor.

Faltu tells Charan everything that how Pappi kidnapped her and Ayaan came to her rescue but she eloped from there as she didn't want to burden Ayaan anymore.

Faltu didn't tell her father the truth about the Sindoor.

Meanwhile, back at the Mittal's house, Tanisha finds the ring in the milk and wins the round which overjoys everyone.

Back at the hospital, Charan tells Faltu that he will get back at Pappi himself.

Faltu asks him to drop it and leave it to God.

Charan asks him if anything else is bothering her or not.

Faltu confesses to him that her loss of eyesight is not sudden but was diagnosed 3 months ago, but the treatment was so expensive that she couldn't bear to put that pressure on Charan.

Pratap asks Charan to stay here in Mumbai and treat Faltu there only because her hope is everything that is keeping her standing.

Meanwhile, Angoori beats Lajwanji with a broom and asks her about Pratap's whereabouts but Jamuna stops her and says that she will not succeed in her evil plans.

Angoori even finds out that Faltu eloped from Pappi's clutches again making her furious.

Back at the Mittal's house, Kanika asks Tanisha and Ayaan to get ready and leaves.

Tanisha says to Ayaan that she has never seen Kanika this happy. Although she is always irritated, somewhere in her heart, she is a little kid.

Ayaan tells her that being a single parent is not easy, Kanika has to take up the responsibilities of both father and mother.

Tanisha asks Ayaan if he is okay or not.

Ayaan says that if he is honest then he is not okay, he is worried about Faltu but Tanisha has been very understanding throughout.

Tanisha hugs Ayaan but Ayaan takes a back.

Tanisha tells him that he needs to drop the shy act now as they are now married but before Ayaan could say something, Kanika arrives and excuses Tanisha.

The pandit ji arrives and Ayaan and Tanisha bend down to take blessings from him.

Pandit tells them that before Tanisha goes back to her in-laws, she and Ayaan have to visit a temple and take Shiv ji's blessing because a lot of bad eyes fall upon the newly married couple.

Ayaan and Tanisha immediately leave for the temple to be back within the Murat.

Back at the hospital, the doctor asks Faltu to meet with the eye specialist, Monica Mishra.

Faltu thanks the doctors and the nurses and leaves the hospital.

© Copyright tellybest.com, 2022, 2023. All Rights Reserved. Unauthorized use and/or duplication of any material from tellybest.com without written permission is strictly prohibited.
Cached Saved on: Wednesday 25th of January 2023 02:38:32 PMCached Disp on: Thursday 9th of February 2023 06:04:23 AM