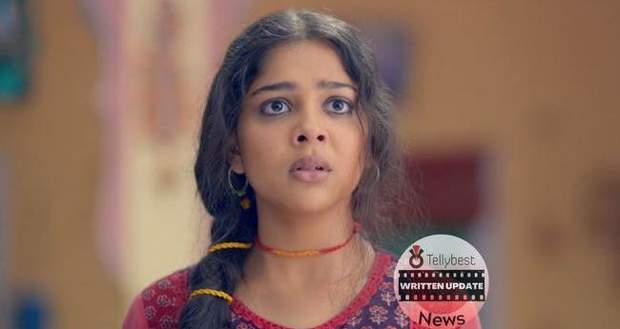 She reflects on her attempts to assist her father but becomes discouraged when she considers the repercussions.

She then has flashbacks of meeting with the doctor because of her vision issues, and he cautions her about irreversibly losing her eyesight and advises her to inform her family so that she can be treated.

However, she refuses, declaring that Charan already has a slew of issues and she does not want to overwhelm him further.

She is determined to keep the truth hidden from everybody in order to assist her Charan.

Meanwhile, Su and Ayaan are looking for Ratan Guesthouse. They enquired with the people of Ittarpur, but they were unable to provide an answer.

Su becomes tired and begins to grumble, but Ayaan convinces her that they should fulfil their father's wish.

Ayaan and Su continue their journey and Su keeps her phone there while a guy tries to remove it, but Ayaan grossly misrepresents him as a thief. He scolds him and takes the phone from him.

Faltu becomes enraged when he overhears their conversation. She fights for the man and berates Ayaan.

Su accuses Faltu of making her lose sight of the address of the guesthouse, while Ayaan mistakenly refers to her as useless.

Faltu is offended by Ayaan's words and requests that he retract them. He denies it, while Su insists on Faltu assisting them and asking for the address of Ratan Guesthouse.

Faltu sneers and chooses to teach Ayaan and Su a lesson. She gives them the incorrect address and sends them far away from the guesthouse.

Meanwhile, Siddharth(cousin brother) sees Tanisha's(Ayaan's fiance) photo and conveys his feelings for her.

He declares that he will not let her marry his brother Ayaan and vows to get her.

Just then, Sumitra (Siddharth's mother) arrives and informs him of Janardan's choice to offer Ayaan his role.

Siddharth becomes enraged and decides to take over Ayaan's position. He plots with his mother Sumitra and resolves to teach Ayaan a lesson.

Ayaan and Su, on the other hand, arrive at Ratan's guesthouse after much difficulty. They complain about Faltu, claiming that they met a girl who led them astray. Meanwhile, Faltu is startled to see them.

Meanwhile, Faltu appears in front of them and prevents them from revealing the truth to her family.

© Copyright tellybest.com, 2022, 2023. All Rights Reserved. Unauthorized use and/or duplication of any material from tellybest.com without written permission is strictly prohibited.
Cached Saved on: Monday 21st of November 2022 02:54:01 AMCached Disp on: Sunday 4th of December 2022 11:46:15 PM