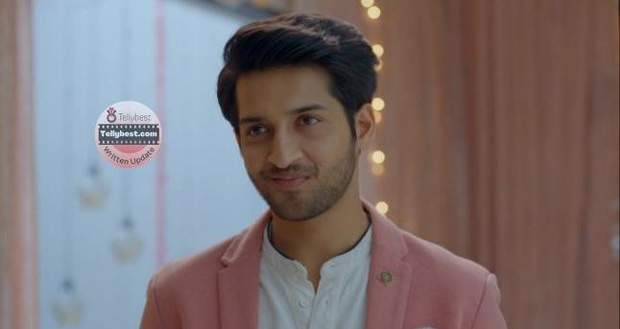 Today's Faltu 5th December 2022 episode starts with Faltu and Ayaan locking their gazes and smiling at each other while Tanisha is busy getting Mehendi applied on her hands.

Ayaan gets a call and goes to attend to it while he keeps on looking at Faltu.

However, he bumps into Janardan who jokes and asks him where he was looking.

Further, Janardan sees Faltu getting Mehendi applied to her hand and tells them to wind up the Mehendi function so that they can prepare for the sangeet.

Later, the couples are arguing among themselves when Ayaan comes there and laughs at them.

Govardhan asks Ayaan if he has done his rehearsals while Ayaan informs them that Faltu and Tanisha are practicing.

Meanwhile, in the other room, Tanisha keeps on getting irritated as she fails to do a step right and tells Faltu that everyone will make fun of her if she doesn't dance perfectly.

However, Faltu poetically talks to Tanisha and tells her that once she and Ayaan's hearts match, they will automatically dance gracefully with each other while the music will also sing its tune to their rhythm.

Back at Ittarpur, Laajwanti meets up with Amar and tells him that her husband has left her because Faltu eloped.

Laajwanti requests Amar to run away with her and take her to Mumbai so that they can start their new lives.

He tells her that it will tricky while Laajwanti says that she does not want to be with anyone else other than him and hugs him.

Just then, Laajwanti heard her parents talk and leave telling Amar that she will talk to him later about the plan of how to elope.

Back at the Mittal house, the ladies of the Mittal family dance on the stage happily and enthusiastically while Ayaan sees Faltu walking in a beautiful white outfit but with an uncomfortable expression.

He looks at her and signals that she is looking beautiful which makes her smile shyly.

Just then, Su comes there and teases him saying that his eyes are glued to her sister-in-law, and asks him if she is looking that hot.

Ayaan gets shocked while Su says that she was joking and states that Ayaan's eyes were stuck to her like stickers.

Faltu comes there and tells the couple that they look good together while Tanisha and Ayaan thank her.

Further, Tanisha tells Ayaan to keep his Mittal personality inside and bring out his romantic hero today.

Kanika gives a fabulous performance while Faltu and Ayaan keep on looking at each other.

Back at Ittarpur, Jamuna requests Charan to bring back Faltu and get her married to Pappi so that they can send Laajwanti and Antima back to their in-laws.

However, Charan denies it while Laajwanti comes there and tells Jamuna that Faltu will not return to Ittarpur at any cost and she will also not go back to her husband's house.

Jamuna and Laajwanti argue while Laajwanti leaves followed by Antima who tries to calm her down.