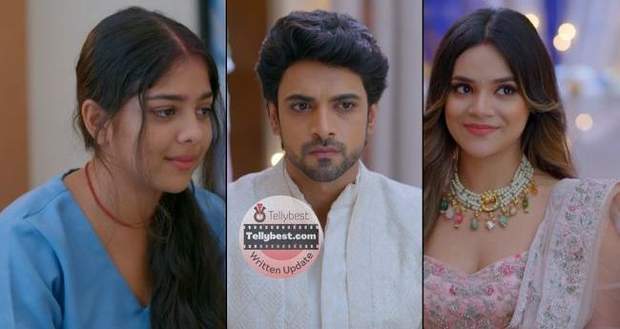 Today's Faltu 5th January 2023 episode starts with Faltu, Charan, Pratap, and the doctor going to the eye specialist when Charan gets a call from Jamuna who asks him to bring Faltu back.

However, Charan tells her that they have some business left in Mumbai and will come after attending to it.

Jamuna asks Charan to send Pratap back because Angoori is getting on everyone's nerves, but Pratap tells her that he will not leave his sister's side.

Jamuna then talks to Faltu and tells her that she misses her a lot.

Faltu says that she misses her too but will only come back to her once she has achieved all her dreams.

Meanwhile, Kanika asks Pandit ji, why did he get mute when he saw Tanisha's Kundli.

Pandit Ji tells her that there is an unknown evil hovering in the way of Tanisha's and Ayaan's marriage and in the next 30 days it can surface and bring a lot of damage.

He continues to say that the only way to avoid this danger is if Ayaan and Tanisha do not fulfill their marital commitments and stay apart from each other for 30 days.

Kanika is shocked but she values his decision.

Meanwhile, Faltu and the others stop for some refreshments. Faltu hears temple bells, the doctor tells her that today all the newlywed couples have to the temple to seek blessings from lord Shiva.

Faltu thinks to herself that even though no one in the world knows about her relationship with Ayaan but she knows and will respect it for the rest of her life.

Concurrently, Ayaan and Tanisha reach the temple as well.

Back at the Mittal's house, Rijula and Savita are decorating Ayaan's and Tanisha's room and reminiscing their old memories when Govind and Mayawati arrive and tell them that Ayaan and Tanisha have gone to visit the temple and will be back soon.

Meanwhile, Faltu excuses herself by saying that she needs to go to the washroom but then goes to the temple instead.

A woman stops her and says that only married women are supposed to go to the temple today to which Faltu replies that she is married but forgot to put on the Sindoor.

The woman hands her some sindoor which Faltu applies on her head and thanks the woman.

She escorts Faltu to the front gate of the temple and asks her to join the long line.

The woman also hands over the contents through which Faltu can perform Pooja.

Meanwhile, Ayaan and Mittal reach the temple as well, Tanisha gets worried seeing the line that they might not reach their house in time.

A worker of the temple arrives and asks Ayaan and Tanisha to skip the line because Pandit ji has already informed the temple staff.

Tanisha and Ayaan perform the Pooja in front of the shivling and perform Arti too as Faltu and the other ladies wait in line.

As Tanisha and Ayaan return from their Pooja, Tanisha slips and Ayaan holds her and asks her if she's okay.

Faltu overhears and recognizes Ayaan's voice and turns herself around so that he does not see her.

Back at the food Dhabba, Charan gets worried as half an hour has passed and Faltu hasn't come back.

Pratap goes in search of her.

© Copyright tellybest.com, 2022, 2023. All Rights Reserved. Unauthorized use and/or duplication of any material from tellybest.com without written permission is strictly prohibited.
Cached Saved on: Wednesday 25th of January 2023 12:01:15 PMCached Disp on: Wednesday 1st of February 2023 05:27:47 PM