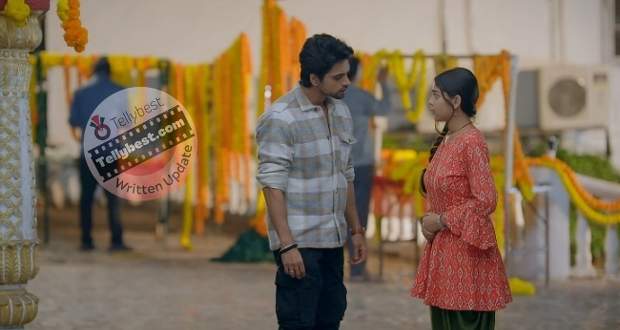 Today's Faltu 6th December 2022 episode starts with Su announcing that it is time for the couples to show off their moves and invites all of them onto the stage.

Janardan and Savita start the dance while Kinshuk and his wife take the stage afterward followed by Govardhan and Sumitra.

All the couples dance and Tanisha enjoys their performance while Ayaan feels emotions stirring inside his heart while gazing at Faltu.

Govardhan accidentally steps on Sumitra and she angrily leaves the stage while Sid goes after her with a glass of water.

Sid tells Sumitra to help him by keeping an eye on Faltu and Ayaan throughout the whole event.

He tells her to record the pair every time they are together and tells her that he will inform her about everything later.

Meanwhile, the family members get mesmerized by Su's dance performance while Kinshuk says that now it is time for the highlight of the night couple to dance and calls out Ayaan and Tanisha.

Faltu gives both of them thumbs up to calm Tanisha's nervousness while Ayaan keeps on looking at Faltu.

While dancing, Ayaan keeps on looking at Faltu and even imagines Faltu in Tanisha's place.

He lets go of Tanisha's hand wondering what is happening to him while Tanisha tugs him back and continues their performance.

Meanwhile, Sid notices both Ayaan and Faltu's expressions changing and forms an idea.

While sugarcoating his words, Sid talks to Faltu and tries to ask her if she would have agreed to marry Ayaan had he not been engaged to Tanisha.

However, the expression on Faltu's face change as she looks at Sid with sharp eyes and asks him what he wants to mean by that question.

She further responds to the questions by saying that she eloped from her home and her marriage for only one dream which is to make her father proud and become 'Anmol' from 'Faltu'.

After the whole family's performance, Ayaan talks to someone on call and tells him that he will meet him the next morning with the player.

On the other hand, Faltu is serving the guests when two guests stop her and ask her who she is.

However, before Faltu can respond, Ayaan comes there and introduces Faltu as a special guest of the Mittal family.

He further takes Faltu from there and to the guest room where he tells her to not act like a servant rather than a guest.

Sumitra tries to overhear their conversation but fails after which she records a video of them talking to each other while standing so close to her.

Meanwhile, Ayaan tells Faltu to meet him at the back entrance at 5 in the morning and leaves from there as Janardan is calling out to him.

Later, Sumitra shows the video to Sid who says that it is useless since it has no audio.

However, Sumitra tells him to notice the body language which confirms that Faltu and Ayaan have known each other for longer than they claim to.

Sid agrees and further tells Sumitra that he will get the truth out of Faltu by becoming her friend.

The next morning, Faltu wakes up before the alarm and happily tries to sneak out when Rijula catches her.

Faltu gets surprised to learn that Rijula knows about their early morning adventure and tries to ask her about it but Rijula locks her out of the room telling her to leave and be on time.

Rijula further wonders sitting on her bed why Ayaan is going against his god-like father's principles for Faltu.

© Copyright tellybest.com, 2022, 2023. All Rights Reserved. Unauthorized use and/or duplication of any material from tellybest.com without written permission is strictly prohibited.
Cached Saved on: Thursday 26th of January 2023 04:50:00 AMCached Disp on: Tuesday 7th of February 2023 01:12:37 AM