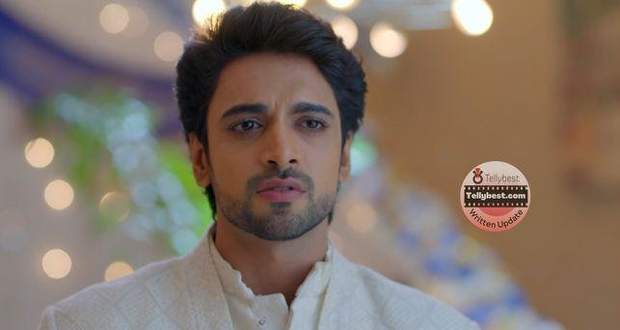 Today's Faltu 6th January 2023 episode starts with Tanisha slipping while Ayaan holds her and asks her if she's okay.

Faltu overhears them and recognizes Ayaan's voice and turns her face to the other side so that he doesn't spot Faltu.

Faltu thinks to herself that no matter how far she tries to go from Ayaan, God keeps crossing their ways.

Meanwhile, Ayaan spots Pratap, who is searching for Faltu and thinks to himself that Faltu must be present there.

Meanwhile, The Pandit asks Faltu to tell the name of her spouse, but Faltu tells him that it is customary that women in her village do not take their husband's name.

After the completion of her Pooja when Faltu was returning, Ayaan spots her.

Faltu senses someone coming closer to her and asks him who he is.

Faltu says his name at which Ayaan says that he is happy to know that she has not forgotten his name.

Ayaan then spots the sindoor in Faltu's head while Faltu remains quiet.

Faltu thinks to herself that Ayaan doesn't remember the truth about the Sindoor.

Ayaan asks if Pappi has filled the sindoor in the head forcefully.

Faltu raises her voice and sternly replies that she is not mandated to give him any answers and she didn't give him a call because she doesn't want to talk to him.

Faltu asks Ayaan to leave her alone because she doesn't want any relations with him.

Ayaan says that he will not leave until he gets all the answers.

Ayaan says that he saw the sindoor on her head before getting unconscious and he has a small feeling that maybe it was he who filled it.

Faltu screams Ayaan's name to shut him and says to stop saying gibberish.

Faltu tells Ayaam that she got married to someone to protect herself from Pappi as she no longer wants to be dependent on Ayaan.

Faltu says that she will never go back to playing cricket and shouts at him and asks him to leave.

The doctor finds Faltu and calls her name.

Faltu tells Ayaan that he is her husband.

The doctor holds Faltu's hand to direct her outside and says that the food is getting cold and they have to leave.

The doctor asks looking at Ayaan who he is at which Faltu says that she has no idea.

Ayaan gets heartbroken and asks them to stop.

Ayaan thanks Faltu for showing him the mirror otherwise he would have never known her reality.

He calls her selfish and says that he will never see her face and leaves.

The doctor breaks into a lot of questions.

Faltu asks for his help and says to rub off the sindoor in her head because she will have no answer to give her father and she will tell him the entire truth.

Meanwhile, Ayaan goes back to Tanisha and says that every needy person is a cheater.

Ayaan and Tanisha then reach Kanika's house and tells the entire truth about Faltu.

Tanisha tells Ayaan that maybe there is a misunderstanding, but Kanika says that girls like Faltu are always in search of taking advantage of rich people.

Kanika then says that she will make Faltu pay if she returns to the cricket academy.

Ayaan says that she should not bother doing that because Faltu doesn't even deserve their hatred.

Meanwhile, Pandit Ji arrives and asks if the Pooja was successful.

Tanisha tells him that the Pooja was successful.

Kanika asks Pandit ji if a problem named Faltu has left her children's life forever or if are there chances of her coming back.