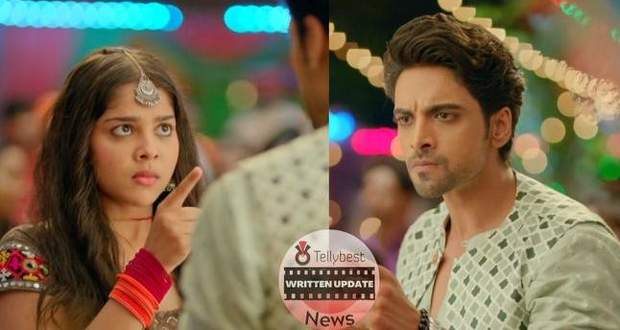 Today's Faltu 6th November 2022 episode starts with Su dragging Ayaan to the dance floor where Faltu and Ayaan have a dance-off.

On the other hand, Pappi approaches Faltu's parents to ask for her hand in marriage.

Charan, his wife, and Ratan are shocked to hear that Pappi wants to marry Faltu. Ratan is elated at the offer but Faltu's parents aren't.

Charan and Ratan discuss privately that Pappi is 10 years older than Faltu and so she cannot get married to him.

Ratan says that age difference doesn't matter as this won't be the first time a marriage is taking place where there is such a wide age difference.

Pappi suddenly ask whether the decision has been made, to which Ratan answers excitedly that Faltu will get married to Pappi as that is advantageous for everyone involved.

Faltu at that moment arrives and shouts saying getting married to Pappi is a curse and nothing else.

Ratan's wife berates Faltu asking her to not create any disturbance and get married to Pappi without any fuss, as Faltu doesn't have a lot of prospects and Pappi is the best choice.

Ratan tells her that Pappi is not asking for any dowry and is willing to pay for the entire marriage.

Meanwhile, Kanika asks Janaradhan to send the Panditji tomorrow to match Ayaan and Tanisha's kundlis which makes Savita nervous as she feels her secret will be revealed.

Kanika asks Tanisha to tell Ayaan to be present during tomorrow's ceremony via video call. Tanisha tells Kanika that she tried to call Ayaan but he didn't receive the calls.

Siddharth instigates Tanisha against Aayan by showing her Su's garba video where Ayaan is dancing with Faltu.

On the other hand, Faltu says she will never get married.

Ratan's wife starts to berate her for this but is stopped by Pappi who caresses Faltu's hair and calls her his wife.

Faltu says she will never be his wife, which angers Pappi who tells Charan to return his loan to him within 10 days, or Pappi will imprison them.

Pappi gives an ultimatum to either get Faltu married to him within 10 days or give his money back.

Meanwhile, Su video calls the family, where Tanisha asks for Ayaan but Ayaan has left to find Faltu.

Ayaan finds Faltu crying on the rooftop and starts lecturing on sacrificing for her family.

Faltu says that all of this is easy for Aayan to say as he is a boy but the ground reality is different.

In the meantime, Charan and his wife (Jamuna) are at a loss to figure out how to pay back the money without getting her married to Pappi.

Faltu overhears their conversation and dreams about her various futures one where she marries Pappi, another where her father goes to jail, and a third one where Ayaan coaches her.

Faltu hurriedly goes to Pratap to convince him to give her name for the upcoming tournament.

Faltu and Pratap take a lift from Ayaan, where Faltu and Ayaan come close for a second before he backs off.

Before they drive off Faltu is spotted by Pappi.

© Copyright tellybest.com, 2022, 2023. All Rights Reserved. Unauthorized use and/or duplication of any material from tellybest.com without written permission is strictly prohibited.
Cached Saved on: Monday 21st of November 2022 05:58:13 AMCached Disp on: Monday 5th of December 2022 12:53:33 AM