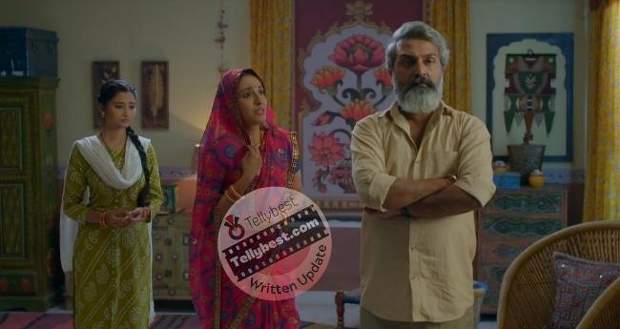 Meanwhile, his Dadi is watching a serial & pressing the Haldi with a mortar & pestle.

The noise of the serial makes Kumkum come downstairs along with Savita who asks the Dadi to give the task of grounding the Tumeric to the servants.

However, Dadi gets nostalgic and says Ayaan is her grandson, so she will grind the Tumeric of his wedding.

Savita gets slight tears in her eyes as she remembers a major flashback of her life when she was pregnant with Ayaan & Janardhan said that he will raise him as his own.

Kumkum catches onto Savita's words when she says that Ayaan has gone through enough.

However, Dadi changes the topic while Faltu looks for ways to sneak outside.

She worries about the punishment Ayaan will give her as she is late.

When Faltu does not see any way to sneak from the main gate, she decides to climb down through the pipe.

Ayaan widens his eyes when he sees Faltu do this and covers his head.

Meanwhile, Sumitra wakes up and thinks it is Govind's snores that are disturbing her.

However, she realizes that it is the sound of someone scratching an object and she sees Faltu's silhouette climbing down the pipe.

She shrieks and wakes up Govardhan with a scream, thinking she saw a Chudail (witch).

Govind wakes up suddenly and thinks Sumitra drinks alcohol all alone without him.

However, she tells him that she saw a Chudail.

Outside, Ayaan scolds Faltu for using the pipe.

She tells him that Sumitra Chachi almost saw her while the hall was occupied by Dadi & his mother.

Faltu jokes that Ayaan has never seen a beautiful girl when he stares at her sternly.

He gives her the punishment of running twenty rounds of the locality to build her stamina while Rijula & Alok can make sure nobody knows that Faltu is not inside.

Faltu gets starry-eyed when she sees the Arabian Sea in front of her.

Just then, a group of boys approaches Ayaan and asks him where he was these days & who is the girl standing beside him.

Faltu gazes at the sand while another boy chimes in & says it must be Ayaan's girlfriend since his big smile answers the question.

Ayaan scolds them playfully and introduces Faltu as his good friend.

He then asks them to get ready to play cricket as Faltu will join them too.

Faltu giggles as Ayaan gives them money to buy a new cricket kit for their upcoming tournament.

After the boys leave, Faltu says she has never seen a man like Ayaan who finds his happiness in fulfilling others' dreams.

However, he turns his back on her when Faltu asks what kind of fighting does he fight everyday.

© Copyright tellybest.com, 2022, 2023. All Rights Reserved. Unauthorized use and/or duplication of any material from tellybest.com without written permission is strictly prohibited.
Cached Saved on: Wednesday 25th of January 2023 07:42:33 PMCached Disp on: Tuesday 7th of February 2023 01:35:43 AM