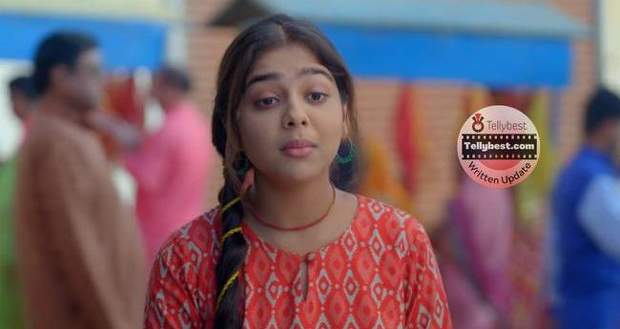 Today's Faltu 7th January 2023 episode starts with Kanika telling Ayaan to stop keeping any guilt about Faltu and only focus on his wedding.

The Pandit Ji tells Kanika that now they have to start the ritual of sending Tanisha back to her own house.

Kanika tells Tanisha that she has to throw the lava (rice pot) backward while stepping out of the house, she's not supposed to turn back otherwise it is considered bad luck.

Meanwhile, Faltu and the others have reached the eye specialist, but the doctor has gone to the other hospital for attending to an emergency case.

Doctor Ajeet who is along with Faltu tells the nurse that he can request the appointment himself.

The nurse says that the next appointment can be given tomorrow at 10 am making Charan very restless.

Ajeet tells Charan that they can stay in his house for the night.

However, Faltu says that she doesn't want to be a burden on him as he has already done a lot for them.

Charan holds Faltu and tells her that she will get her eyesight back and doesn't need to worry about the money.

Faltu asks Charan if she's worried about their accommodation for the night and not about her own self.

Charan hugs Faltu and says that he has money, and they can stay in a hotel for the night.

Meanwhile, Janardhan learns about Faltu from Kanika and gets enraged and says that Faltu is the cleverest girl he has ever met.

Sumitra says that she has always been doubtful about Faltu but no one listened to her.

Harsh tells Janardhan that Faltu's eyesight was compromised as told by the police then how can she possibly get married in over a night?

Janardhan says that she must have pretended at which Rijula says that she is not convinced and there must be something else going on that they aren't seeing.

Janardhan angrily says that it is because of Rijula that they are seeing this day as she is the one who brought Faltu into the house.

Back at the hotel, the receptionist asks for Faltu's identity proof.

Luckily, Pratap had packed all the important documents of Faltu just to be cautious.

Also, there is a cricket match going on on the TV in the receptionist's room.

Faltu gets happy when she hears that the women's cricket match has scored a 4 and gets up happily.

Faltu then remembers Ayaan, who told her that she needs to turn from Faltu into Anmol by pursuing her dream of becoming a cricketer.

She keeps her hands over her ears and shouts to shut her memories and begs Charan to take her away from there as being around cricket is driving her crazy.

Meanwhile, Janardhan tells Savita and Mayawati that Pandit ji has informed them that Ayaan and Tanisha are not supposed to carry out their marital obligations to each other for the next 30 days.

Back at the hotel room, Charan and Pratap try to cheer Faltu up.

Charan says that Faltu is the type of girl who is a fighter and never lets the world walk over her.

Faltu replies that she is no longer the Faltu who had big dreams and working eyes.

Pratap and Charan say that Faltu will get her eyesight back, but she needs to stay strong.

Faltu stands up and says that she will get through every challenge, whether or not she gets her eyesight back.

Meanwhile, Jamuna starts packing her clothes as she wants to leave for Mumbai to be with Faltu.

Laajwanti calls Charan and tells her that Jamuna has gone out of her mind and has decided to go to Mumbai.

Charan asks Jamuna not to come to Mumbai as it will alert Angoori and Pappi.

Jamuna gets out of her control and cried her heart out to Laajwanti.

Meanwhile, Ayaan and Tanisha are driving back to the Mittals' house.

Ayaan is still stuck up about his conversation with Faltu and Tanisha is looking for the interior designs for her room.

She keeps talking to Ayaan and tells him about the changes she wants to make in the room, but Ayaan is not paying attention and is still lost in Faltu's thoughts.