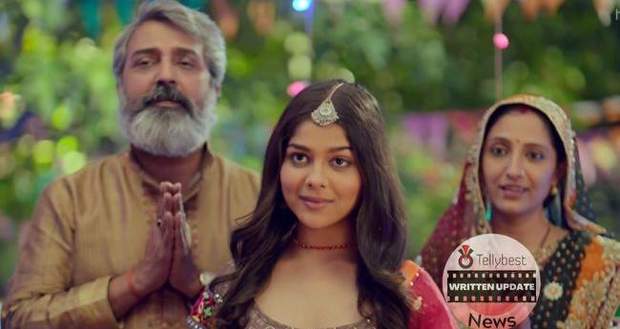 Meanwhile at the Mittal house, Savita is looking through old photos when Janardhan asks her to not get nostalgic about the old days and concentrate on the future.

Savita says that as far as the future is concerned they should inform Kanika about Ayaan's secret.

Janardhan says that some secrets should remain buried like this one as apart from him, Savita, Ayaan, and Janaradhan's mother nobody knows.

In the meantime, the club coach tells Faltu to not get ahead of herself after hitting those 5 sixes.

He also tells Faltu that he won't give the other girls a chance to get destroyed like her.

Faltu pleads with the coach and the coach gives a sharp no and threatens Faltu by calling Ratan.

Faltu begs him to not do so and just as he is about to say something Goddess Durga's procession arrives and the coach gets involved with that.

Faltu also comes out of the club to see the procession when Pratap and Faltu spot Pappi and Ratan's wife and are shocked and before they could run Pappi also spots them.

Suddenly a bus crosses the road and Faltu and Pratap run with Pappi and Ratan's wife in pursuit.

Faltu and Pratap run to save their lives and enter Ayaan's mart.

Ayaan says that he has no idea as Pappi and Angoori are the first customers.

Pappi starts hitting Ayaan but is stopped by Angoori, Ayaan further says that Angoori is free to check the premises.

Pratap and Faltu enter the cricket section, where Pratap acts as a mannequin, while Faltu steals the clothes and wigs of a mannequin.

Meanwhile, at the Mittal house, the priest asks for the kundalis of Ayaan and Tanisha.

Kanika asks Savita to give the kundalis which makes her nervous and she says that Ayaan's kundali isnt available.

Sumitra however chimes in to say that all the kundalis of the Mittals are in the Janardhan's mother's locker.

On the other hand, Angoori catches hold of Pratap and asks him about Faltu.

Faltu appears dressed as a boy, Angoori asks who the boy is and Faltu urges Pratap to say her name which she keeps as Anmol Singh.

Pratap asks Angoori to leave while Anmol can get his dress fitted, but before Pratap could leave Ayaan stops them, and asks Faltu to get the clothes billed.

Meanwhile, Sumitra brings Ayaan's kundali to the priest and Kanika asks why the birthdate is written from a date different than the one on which it is celebrated.

Janardhan chimes in saying that the priest wrote the date and time wrong. Tanisha tells Kanika to let it be and they all go for breakfast.

In the meantime, Faltu/Anmol reaches the cricket club to write Faltu's name for the team but is asked to audition first which leaves Faltu perplexed.

© Copyright tellybest.com, 2022, 2023. All Rights Reserved. Unauthorized use and/or duplication of any material from tellybest.com without written permission is strictly prohibited.
Cached Saved on: Monday 21st of November 2022 06:10:46 AMCached Disp on: Sunday 4th of December 2022 11:04:10 PM