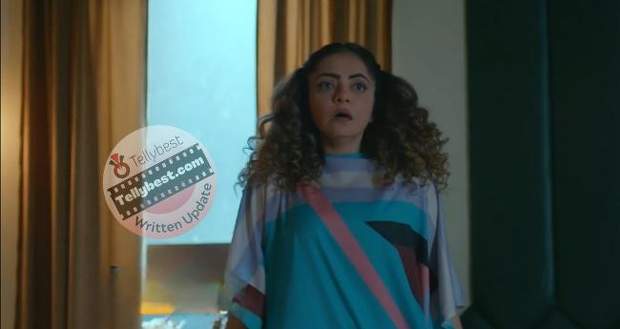 Today's Faltu 8th December 2022 episode starts with Faltu asking Ayaan if he is hiding something from her or not as it is very visible in his eyes.

She tells him that she knows how well of a cricketer he was, so why he left the game.

Ayaan turns his back on Faltu & remembers the incident when he told Janardhan that he wants to focus on cricket & not on the family's business.

Janardhan then told him if he was his biological son, he wouldn't say the same words.

The flashback ends and Ayaan tells Faltu that sometimes we have to let go of our dreams for the people who love us.

However, Faltu is of the opinion that if someone loves us for real, they wouldn't let us drop our dreams.

Just then, Ayaan reminds her to be prepared as she is going to play a cricket game to get selected for Mumbai's Cricket Women's Team as only sixteen girls will be selected.

Ayaan reminds her to be strong as she can do it alone.

Meanwhile, everyone gets scared for Sumitra as she tells everyone she saw a "Dayaan" last night.

Faltu & Ayaan arrive outside the Mittal House & she forces him to go inside first as he has his Haldi today.

However, Ayaan tells Faltu that he is waiting for her so she doesn't get hurt while climbing the wall.

Faltu convinces him to go but Ayaan doesn't go & watches Faltu secretly as she puts bricks to climb up.

However, her foot slips but Ayaan saves her in his arms.

Meanwhile, a mob of villagers gathers outside Charan's house, led by Angoori who states that Faltu's escape has provoked other girls to pursue studies and become pilots, businesswomen, etc.

Charan asks everyone to stay away from this family matter but the mob pressurizes him to make Faltu come back as she is staying in an unmarried man's house.

However, Faltu's sister Lajwanti speaks in her support but her mother shuts her up.

At Mittal House, Faltu asks Ayaan why he cares for her so much but he dismisses the topic swiftly.

Meanwhile, Sumitra tells Siddharth that she saw a witch but he asks her to go to the doctor.

Ayaan also asks Sumitra to calm down but Sid suspects where Ayaan is coming from early in the morning.

In Ittarpur, Charan states that Faltu is not coming back or marrying Pappi while Angoori gets angrier by the second.

At Mittal House, Rijula is anxious when she doesn't see Faltu & Sumitra along with Tanisha come to enquire about her.

Rijula dumbly says she doesn't know where Faltu is and Sumitra tells how she saw a chudail last night climb down the pipe.

Thankfully, Faltu emerges out of the bathroom chanting Hanuman Chalisa and tells Sumitra that lores of chudail & ghosts are useless.

However, Sumitra calls Faltu useless and leaves while Tanisha says she is waiting for Faltu outside.

Rijula scolds Faltu for coming so late but feels happy that she is back in time.

On the other hand, Tanisha tells Ayaan that she has to talk to him about Faltu.

© Copyright tellybest.com, 2022, 2023. All Rights Reserved. Unauthorized use and/or duplication of any material from tellybest.com without written permission is strictly prohibited.
Cached Saved on: Wednesday 25th of January 2023 05:17:41 PMCached Disp on: Monday 6th of February 2023 04:21:39 AM