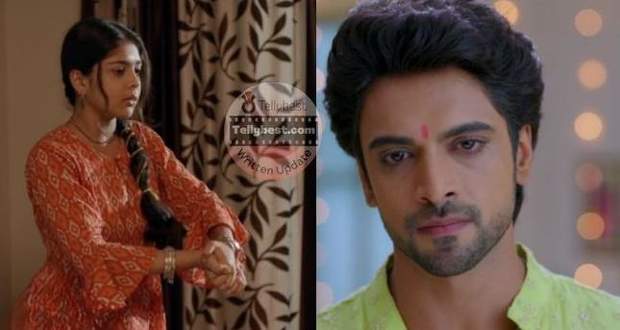 Today's Faltu 8th January 2023 episode starts with Ayaan and Tanisha entering the Mittal's house and doing all the rituals that welcome the new bride into the house.

Meanwhile,  Charan tells Faltu that she doesn't need to worry as no one will trouble her from now onwards.

He tells Faltu that he's going along with Pratap to find a house and a job as they can't stay in the hotel forever.

Faltu holds his hand and requests him not to leave her alone as she is very scared.

Charan says that she doesn't need to worry about anything as no one knows about their whereabouts.

Faltu apologizes for being a burden on him.

Charan hugs her and says that she can never be a burden on him. It is only a part of life and she should not give up.

Faltu requests Charan that Ayaan should not find out about Faltu's blindness and her location as he has already done enough for her.

As Charan and Pratap leave, Faltu sits down and starts crying while remembering her interaction with Ayaan.

She says to herself that Ayaan has given her hope to win and as long as she possesses that hope, she can't ever lose.

Faltu then says that she will never give anyone the position that he holds in her life as he is the only God she had ever known.

Faltu says that whatever Ayaan has taught her is enough to turn her life around.

Meanwhile,  at the Mittal's house, Tanisha is performing the Ritual of picking up thali's from the floor of each member of the house without making a sound.

However,  when she picks up Ayaan's thali, it slips from her hand making everyone in the house surprised.

Everyone consoles Tanisha and says that it happens to many girls.

Siddharth says sarcastically that a clever girl like Faltu couldn't separate Tanisha and Ayaan how can a lifeless Thali stand in the way of their marriage?

Ayaan raises his voice and says that it is the last time anyone has said Faltu's name in the house.

Janardhan is happy when he sees Ayaan finally realizing the true colors of Faltu.

Tanisha and Ayaan leave for their room but Savita goes after them and tells them that they can't stay in the same room because Pandit Ji advised Kanika to do so.

She continues to say that no matter what they will find Faltu as Paapi is there in Mumbai.

Ratan threatens Jamuna and says that he will make life hell for her.

Back at the hotel, Faltu practices the lessons that Ayaan had given her.

Paapi arrives at the same hotel coincidently to spend the night.

Meanwhile, Ayaan informs his junior that he will join the office immediately as he doesn't want to waste any more time.

Rijhula enters Ayaan's room and tells him that she knows Ayaan more than anyone else.

She tells him that Ayaan also knows that Faltu is the type of girl who would betray anyone.

Ayaan replies that he had seen Faltu himself and has seen the truth himself.

Ayaan says that he doesn't want to waste any more time on Faltu and will give her time to Tanisha and his family.

Rijhula asks Ayaan if he is in love with Tanisha at which Ayaan gets speechless.

Back at the hotel, Faltu hears Paapi whistling and mistakenly assumes it to be Pratap and starts heading outside her hotel room.

© Copyright tellybest.com, 2022, 2023. All Rights Reserved. Unauthorized use and/or duplication of any material from tellybest.com without written permission is strictly prohibited.
Cached Saved on: Wednesday 25th of January 2023 02:10:51 PMCached Disp on: Tuesday 31st of January 2023 07:54:56 PM