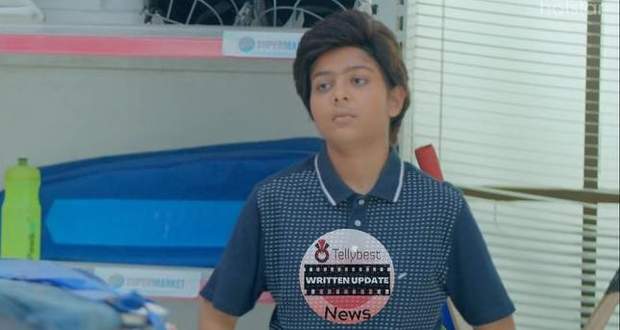 In 3 balls she is only able to hit one four, which gives the other players chance to mock her.

The coach then says that Anmol cannot be in the team as he will be a liability and the coach agrees.

However, Pratap pleads with the coach to take Anmol/Faltu in the team as they lack an 11th player.

The coach hesitatingly agrees to give the condition that Anmol will be a standby player.

On the other hand, Ayaan receives a call from his grandmother who tells her about the events that happened during the day.

In a flashback, Ayaan recalls the day when Ayaan got selected for the Indian cricket team.

Ayaan remembers telling Janardhan that he will not handle Janardhan's business as his passion lies in cricket.

Janardhan is sad to learn that and gets angry when Ayaan threatens to leave the house to pursue cricket.

Janardhan in his anger says that if Ayaan was his biological son he would never talk back like this.

Ayaan is shocked to hear that and asks what he means by that.

Janardhan reveals that Savita was pregnant before he got married Savita and asks Ayaan to think where he and Savita would be if it wasn't for Janardhan to adopt him.

Ayaan still in the flashback promises Janardhan that from today onward he won't even touch a cricket bat.

Ayaan apologises to Janardhan and promises to be a good son.

Meanwhile, Savita also sees in her flashback the day she was about to commit suicide because of her illicit affair.

Janardhan prevents Savita from doing so and tells her that Janardhan will adopt the child and marry Savita.

Meanwhile, Faltu tells Pratap that she must practice from today onwards remembering the doctor's warning.

On the other hand, Ayaan calls Savita and consoles her to stop crying over what didn't happen.

Savita asks Ayaan to make Janardhan proud as that is his duty, unknown to Savita, Sumitra has heard the conversation.

On the other hand, Ayaan after talking with Savita sees Anmol/Faltu playing cricket and coaches her to improve her stance.

Faltu/Anmol hits a six with Ayaan's suggestion and sees that Ayaan has already left.

Faltu then remembers her dream and tells Pratap that God is giving her some signal.

Meanwhile, Kanika tells Tanisha that today she felt something was off when she asked for Ayaan's kundali.

However, Tanisha quickly consoles her telling her not to think too much about it.

Meanwhile, at home Pappi is creating a ruckus saying that he is sure he saw Faltu at the club.

At the same time, Angoori spots Pratap and Faltu and asks her to come to the roof.

Angoori then keeps asking Faltu where she was and hits her when Faltu doesn't reply.

Charan comes over there and asks Angoori to stop, and lies saying Faltu was with him to search for a second job.

Angoori says that Charan is searching for another job to pay back Pappi's loan.

Suddenly, Pappi announces that Faltu and Pappi will be married to him tomorrow.

Charan and Jamuna plead with him to reconsider and Pappi says he will give the family 4 days.

Faltu wonders how she will handle both the cricket tournament and the wedding being on the same day.

Jamuna tells Faltu that she doesn't have any other option than to get married.

Pratap then searches the internet to find out that Ayaan is a Ranji player.

Hearing this, Faltu decides Ayaan would be her teacher.