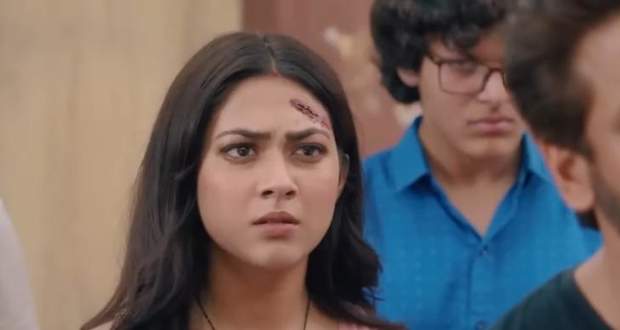 Today's Fanaa Ishq Mein Marjawan 18th April 2022 episode starts with Agastya telling Pakhi how he was devastated after learning that Sameer had gotten transferred and that she wasn't going to be coming to play with him anymore.

Agastya tells Pakhi defeatedly that he wanted to tell her the truth but not in the situation that they are in currently.

Meanwhile, at the Raichand mansion, Neelima gets a call on the home phone and she picks up thinking that it's Agastya.

However, her face turns pale hearing the person on the other end and she immediately disconnects the phone shocking Mona who is standing beside Neelima.

At the safe house, Pakhi acts of falling asleep while Agastya comes there to release her from chains but leaves after having a mental battle with himself.

Agastya leaves after which Pakhi stands up and goes to get the bottle of water but falls and is unable to reach the table due to the chains.

She feels defeated and thinks that she will never be able to leave when she recalls a childhood memory with her father motivating her to not lose hope.

The next morning, Ishaan and the police officers create a fake clinic to trap Yug.

Meanwhile, Pakhi uses her acting skills and tells Agastya that she wants new clothes to change into.

Agastya loses to Pakhi's tears and tells her that he will get new clothes for her and leaves.

Meanwhile, Yug goes after Ishaan and runs away from there realizing that it is a trap.

The police officers and Ishaan run after him but lose him after some time.

Agastya gets out of his dreams and thinks that soon his dreams will turn into reality with Pakhi confessing her love for him.

Meanwhile, at the safe house, Pakhi executes her plan and shouts.

Taiji rushes to her room hearing the scream and rushes to an unconscious Pakhi on the floor when suddenly Pakhi wakes up and hits Taiji on the head with the vase holder.