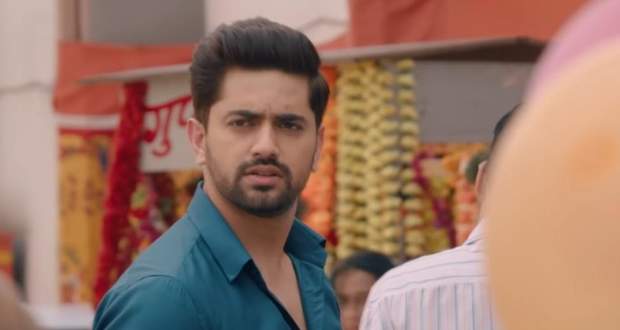 Today's Fanaa Ishq Mein Marjawan 21st April 2022 episode starts with Taiji telling Agastya that his love for Pakhi is absurd while Pakhi is listening to their conversation from behind the door.

Agastya tells Taiji that he has loved Pakhi since he has known the word love and will do anything for her which makes Pakhi feel fascinated with Agastya’s affection for her.

Elsewhere, a man tells the inspector that they couldn't find much from Yug’s sim card other than that he had called someone in Haryana a few days back.

The inspector notices Yug’s facial expression change at the mention of Haryana while Ishaan suggests that they should go to the places near the border of Gurgaon and search for Pakhi.

Back at the safe house, Pakhi falls while going back to the bed and Agastya rushes to her while telling her that she shouldn't get out of bed and get rest.

Agastya takes her to the swing where Pakhi tells him that she’s hungry which surprises Agastya and he happily shouts for Taiji to bring food.

Agastya asks Taiji to feed Pakhi but Pakhi tells him to feed her which leaves Agastya shocked.

Pakhi tells Agastya that she can't understand him as he is the one who cares for her the most but is also the person who betrayed her the most which makes her feel as if she will ever be able to trust or love anyone again.

Agastya feels heartbroken hearing Pakhi’s confession and apologizes to Pakhi saying that his love for her is only the truth and nothing else.

Pakhi holds Agastya’s hand and thanks him for taking care of her and that she appreciates how he walked on the burning rocks even after being afraid of the fire.

Taiji tells him to be cautious of Pakhi.

Meanwhile, at the police station, the Inspector tells the inspector of Jhajjar to search for Agastya.

Later, the mysterious lady gets Yug bailed from the police station.

Elsewhere, Pakhi gets a nightmare and Agastya rushes to calm her while she requests him to sleep beside her.

The next morning, Agastya gets frightened not seeing Pakhi in the room but he gets surprised seeing her in the kitchen helping Taiji.