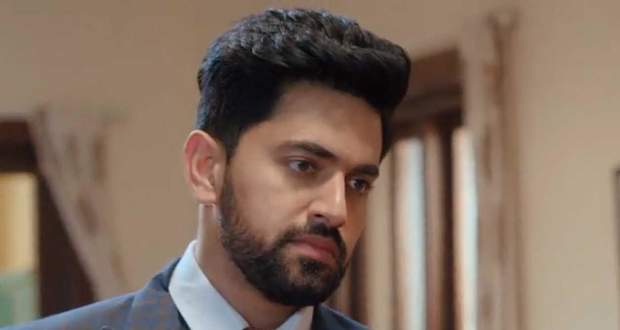 Back in a room, Agastya helps Pakhi with her jewelry.

Ishaan performs a dance for Pakhi while she descends the stairs.

After dancing, Pakhi and Ishaan get situated for the ring exchange ceremony.

Shubho who was given the ring to safe keep on Ishaan's behalf, cannot find it.

It was Tania who misplaced the ring as she was forced by Yug.

Agastya who has planned the whole thing takes his grandmother's ring and gives it to Ishaan.

He tells him not to think much about it and give it to Pakhi or else she might get sad.

The next day, Agastya makes his grandmother apply Haldi to him.

He completely disregards Dadi's concern for his psychotic behavior.

On the other hand, Pakhi's mother is stressed as the Haldi from Ishaan's house still hasn't reached them.

When it finally reaches, Tania is forced by Yug to get rid of it.

She takes it away but fails to get rid of it.

When it is applied to Pakhi, everyone was shocked at it being red.

It is later realized that detergent must have spilled on it.

When it is decided that Pakhi's family would make the Haldi, Nilima, Agastya's grandmother was found in the kitchen with ready-made haldi.

Pakhi's mother thanks to her.

No one knows that it was the same haldi that Agastya made Nilima apply on him.

After everyone applies the Haldi on Pakhi, Agastya approaches her last.

He imagines that both of them are alone in a beautifully decorated place, where he is dropping rose petals on her.

He comes back from his daze and applies the Haldi on Pakhi.

When asked, Tania just hugs her.

She hands Tania some jewelry and cash.

Later, Tania decides that she would leave the country with her mother with the money.