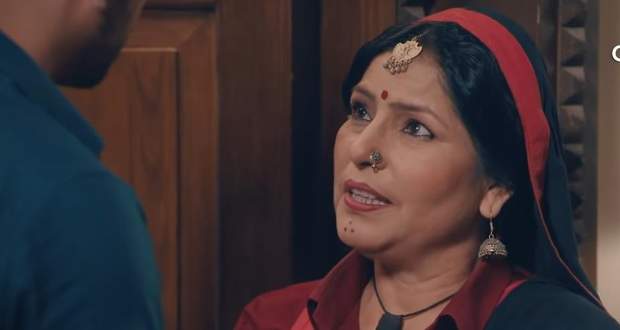 Today's Fanaa Ishq Mein Marjawan 22nd April 2022 episode starts with Agastya dreaming of Pakhi coming towards him with a knife and stabbing him when he suddenly wakes up to see Pakhi massaging his legs.

Pakhi massages his legs saying that he shouldn't have walked on the burning rocks, and applies ointment on his legs.

Meanwhile, at the market, Ishaan, Inspector, and Sameer meet Taiji and ask her about Pakhi.

Taiji says that she knows the girl and is about to say more when a vendor suddenly rings a bell and Taiji forgets everything and leaves.

Later, Taiji returns home and informs Agastya about some people searching for Pakhi.

Agastya gets alert when suddenly there is a knock on the door.

They see Ishaan, Inspector, and Sameer with some constables through the window and Pakhi tries to shout.

However, Agastya takes her away while Taiji opens the door.

Agastya takes Pakhi and hides behind a corridor while the door accidentally stays a little ajar.

The inspector and others barge inside the house and check for Pakhi while Taiji tries to stop them.

Pakhi manages to get free from Agastya's grip and runs towards the door.

However, Agastya gets shocked seeing Pakhi close the door and hide behind the corridor.

Just then, Girish comes there and informs the Inspector that he is staying there as his house is renovating at the moment.

Ishaan and others leave after which Agastya thanks Girish for his help.

Agastya asks Pakhi why she didn't leave and Pakhi says that she was worried the police might hurt him and also worried about her father getting hurt because of him.

Pakhi says that she believes in their relationship and wants to give them a second chance as Agastya wanted.

Agastya hugs Pakhi while Pakhi feels a little uncomfortable and her face twists in guilt.

Agastya tells Pakhi that he will make her very happy and will also apologize to Sameer.

Afterwards, Agastya reminds Pakhi that it is their anniversary and she apologizes for forgetting while he suggests they plan something to celebrate their second chance at love.