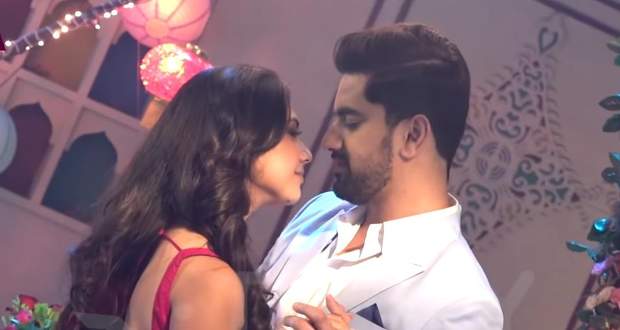 Today's Fanaa Ishq Mein Marjawan 26th April 2022 episode starts with Agastya looking at his mother and recalling how she tried to burn him alive as Meera burns the scarecrow behind her.

Agastya tells Meera to spare Pakhi and questions Yug why he betrayed him and sided with Meera.

Just then, Meera laughs and reveals that Yug is her son and Agastya's half-brother and manipulates Yug into thinking that Agastya knew and still used him as a slave.

Meanwhile, at the police station, Ishaan, Sameer, and the Inspector are worried about Pakhi when the constable comes there and says that a man is claiming that he saw Pakhi and Agastya.

Back in the forest, Agastya goes on his knees and begs Meera to let Pakhi go while Pakhi feels guilty.

Pakhi further rebukes Meera for being an evil mother while Meera tells her that she doesn't know her yet and informs her that all the fears of Agastya are induced by her.

However, Pakhi still talks back to Meera while Agastya stops her and starts begging Meera to let her go.

Meera makes a disgusted expression at Agastya and says that she wishes he would have died in the fire back in childhood.

Just then, Yug kicks Agastya and he falls near a burning piece of wood.

Agastya thinks that he cannot let his fear of fire stop him from saving Pakhi and throws the burning wood at Meera.

Meera and Yug duck as the wood comes towards them while Agastya grabs Pakhi's hand and runs away with her.

On the other hand, Pakhi's mother demands Neelima to give her Agastya's location and curses that he will suffer the same way Pakhi suffered.

Back in the forest, Pakhi and Agastya hide behind a well while Meera and Yug keep looking for her.

Agastya tells Pakhi to escape while he distracts his mother but she refuses to leave him alone.

However, Agastya convinces Pakhi by saying that she can bring help for him by escaping and tells her to remember that he will always love her.

Agastya holds Pakhi's face for the last time and leaves the hiding place while Pakhi looks on.

© Copyright tellybest.com, 2020, 2021. All Rights Reserved. Unauthorized use and/or duplication of any material from tellybest.com without written permission is strictly prohibited.
Cached Saved on: Saturday 1st of October 2022 11:45:39 PMCached Disp on: Sunday 2nd of October 2022 05:28:47 AM