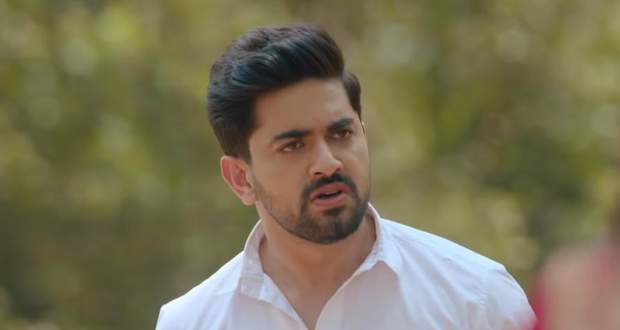 Meera spots Agastya and points a gun at him while demanding Pakhi's whereabouts.

Elsewhere, Ishaan, Agastya, and the police are on the highway to search for Pakhi and Agastya.

At the Singh house, Neelima worries for Agastya while her daughter says that he is nothing but a danger to them and tells her to worry for Pakhi instead.

Back in the jungle, Meera orders Yug to get on his bike and search for Pakhi while Agastya manages to knock the gun out of Meera's hands and fights with Yug to stop him from going after Pakhi.

Yug and Agastya are fighting when the gun fires accidentally alerting Pakhi and Ishaan, Sameer, and the police who are within the hearing distance rush toward the sound.

In the jungle, Agastya manages to take the gun from Yug and shoots him in the leg while Meera tries to manipulate Agastya into giving her the gun.

However, Agastya says that he would not regret killing her and shooting at her but it turns out that the gun is out of bullets.

Meera shoots at Agastya but Pakhi comes there in time and pushes Agastya while getting shot in the process.

Pakhi falls from the cliff when Agastya holds her hand and tries to get her to stop from falling.

He recalls all his moments with Pakhi and begs her to keep holding onto his hand while his hand gets cut by the rock and the blood drips filling Pakhi's hairline.

However, Pakhi starts falling unconscious and her hand slips from Agastya's hand who looks at Pakhi's downfall in a mindless state while looking at Pakhi's ring that stayed in his hands.

Meera hears the sounds of the sirens and drags Agastya away from the edge of the cliff and hands him the gun that was used to shoot Pakhi.

Yug asks Meera what she is doing while Meera makes Agastya shoot Yug in the shoulder who is still processing Pakhi's downfall.