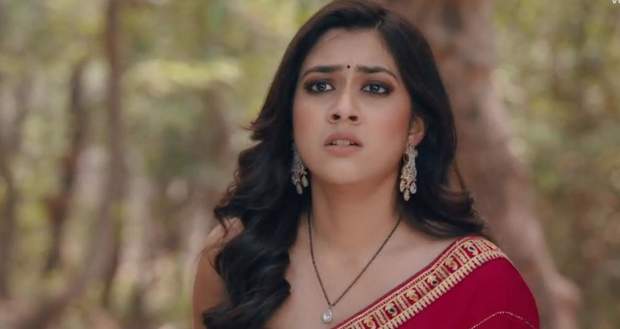 Today's Fanaa Ishq Mein Marjawan 28th April 2022 episode starts with Meera apologizing to Yug and telling him to lie to the police that Agastya killed Pakhi and tried to kill him too.

Meera hides behind a giant rock while Ishaan, Sameera, and the police come there looking for Pakhi.

Yug tells them the story Meera gave her while Ishaan starts beating up Agastya for killing Pakhi.

However, Agastya refuses to accept that Pakhi is dead and shouts into the valley that he will find her.

At night, Ishaan and Sameer break the news of Pakhi’s death to Prema who gets shocked by the news and suffers an attack.

Elsewhere, in the jail, Agastya hears Pakhi’s voice telling him that she is with him and talks into the air making the police think that he has lost his mind.

Neelima comes to the police station to bail Agastya but the inspector refuses while Agastya makes a picture of Pakhi on the wall.

On the other side of the police station, the inspector tortures Yug and demands him to make a statement against Agastya while Yug puts forth a condition.

Later, Agastya dreams of Pakhi feeding him and him sleeping on her lap.

The next morning, Yug makes a statement against Agastya while Agastya’s lawyer and Neelima try to prove his innocence.

The lawyer asks Yug about his mother when Inspector brings in Meera shocking Neelima.

However, Agastya remembers Meera shooting Pakhi and grabbing her by the neck saying that he will kill her.

The police hold back Agastya while Meera goes to the podium and says that she loves both Yug and Agastya as her own.

She says that Agastya is mentally unstable and had also tried to kill her in his childhood by burning her alive.

Neelima tries to reveal the truth but Meera makes up a fake story and says that Agastya had kidnapped her when she learned about his obsession with Pakhi and tried to warn her.