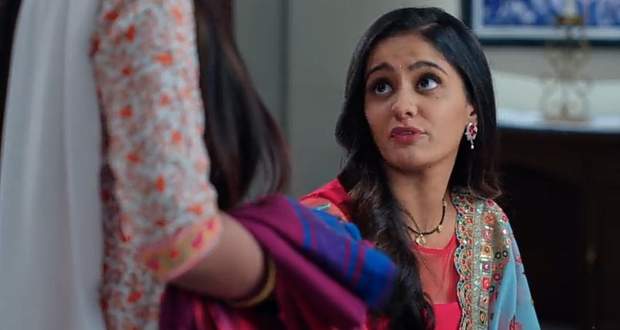 Today's Gum Hai Kisi Ke Pyaar Mein 10 February 2021 episode starts with Devyani requesting Sai to dress her up so that she can go meet her husband.

Sai tells her that she has to study for tomorrow's test and will do her makeup letter.

Devyani talks about her husband also studying hard to become a doctor while Sai asks her why she doesn't tell her husband's name.

Devyani says that they will hurt her husband if she says his name and requests her to do her make up.

Meanwhile, Pulkit thinks to call Sai and calls her while Sai is doing Devyani's hair.

The call disconnects while Sai says that it was jer professor Pulkit's call while Devyani gets shocked hearing his name and recalls her moments with Pulkit.

Suddenly, Devyani starts crying and goes away saying to not hurt him while Sai thinks that her husband's name might be Pulkit.

Next morning, Karishma gives Mohit food and tells him to eat the food at the office in fear of Bhavani seeing her while he says that Bhavani is at some relatives.

Karishma talks about Bhavani but gets silent seeing Bhavani who starts insulting Mohit.

Bhavani tells Karishma to get money from her parents for herself if her husband does not earn money while Karishma tells Mohit to earn a job.

Mohit tells Karishma to never give him food as he made a mistake by eating there while Bhavani says that from now on he will not be given food in Chavan house.

Bhavani goes to take away his plate while Sai holds the plate.

Virat comes there and asks what happened while Bhavani tells Sai that she has no right to talk about family matters.

Pakhi says that Sai does everything to insult Bhavani.