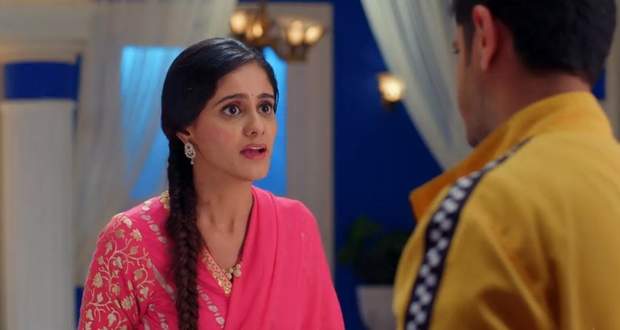 Today's Ghum Hai Kisi Ke Pyaar Mein 11 December 2020 episode starts with Sai getting angry at Virat who tells her to stay away from Devyani.

Sai is cooking breakfast with Karishma, Ashwini and Sonali. She reveals that Pakhi had visited their room late at night for medicine.

She further reveals that Pakhi got angry on them when Bhavani comes there and starts scolding her.

Virat goes to Pakhi and shows his concern by giving her medicines but she wants him saying his wife is waiting for him.

Sai is looking for her mark sheet and is about to fall but Virat saves her.

Sai gets into an intense argument with him about Pakhi coming to their room at late night and mocks her while Pakhi enters.

Sai starts arguing with Pakhi and stops both of them after which Pakhi tells Virat to not come to her room and leaves.

Sai wakes up in the middle of the night and starts worrying about her results while Virat wakes up.

Virat has friendly banter with her and massages her hand while Sai reveals that she misses her father.

Virat tells her a story of one of her cases and puts her to sleep while Pakhi is remembering her parent's words.

© Copyright tellybest.com, 2020, 2021. All Rights Reserved. Unauthorized use and/or duplication of any material from tellybest.com without written permission is strictly prohibited.
Cached Saved on: Saturday 16th of January 2021 01:41:26 AM