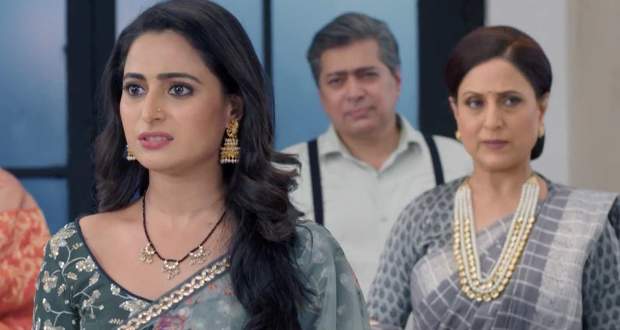 Today's Gum Hai Kisi Ke Pyaar Mein 14 April 2021 episode (GHKKPM) starts with Shivani talking in support of Devyani while Sai confront Virat and asks him if he will close the door on her face.

She challenges him to prove that Pulkit is a fraud and he agrees while closing the door on her face.

Virat announces to Chavan's that he is breaking his relation with Sai and that it is over while Pakhi says that it is Sai's mistake.

Meanwhile, Devyani and Pulkit enter the house after completing the rituals.

Virat remembers playing holi with Sai and gets emotional.

However, Pakhi comes there amd starts taking bad about Sai while he stops her.

He argues with her while she leaves to get food for them.

Ashwini is trying to get Sai to eat while she is saying that she will not eat anything or drink anything from this house.

© Copyright tellybest.com, 2020, 2021. All Rights Reserved. Unauthorized use and/or duplication of any material from tellybest.com without written permission is strictly prohibited.
Cached Saved on: Wednesday 28th of April 2021 09:53:30 PMCached Disp on: Thursday 6th of May 2021 06:04:42 AM