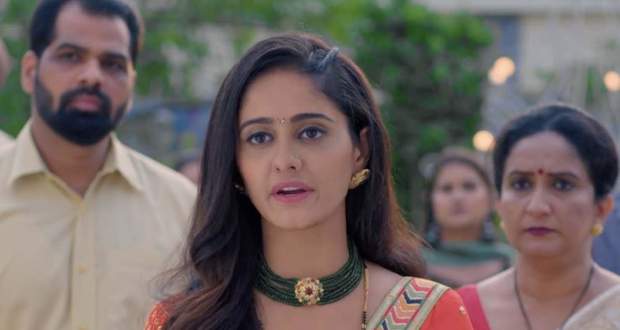 Today's Gum Hai Kisi Ke Pyaar Mein 15 April 2021 episode (GHKKPM) starts with Pakhi asking Virat why is he behaving rudely with her as whatever is happening is because of Sai’s obstinacy.

Virat tells Pakhi that he isn’t behaving rudely he is just trying to handle the situation as for now he just wants to have dinner and sleep and not argue with anyone.

Pakhi tells Virat maybe he is missing Sai that’s why he is behaving strangely.

Sai waits outside the Chavan mansion where Ashwini brings food for Sai but Bhavani insults Sai and tells Ashwini not to serve food to Sai.

Ashwini gets emotional and says she won’t leave until she feeds Sai with her hands.

Virat lashes out at her when he sees Sai waiting outside the Chavan mansion he asks her to leave but Sai with her determined mind says that she won’t go anywhere.

Pakhi makes an offensive comment on Sai’s actions as she says Sai won’t get any sympathy if she goes right now that’s why she is acting fake for Devyani’s betterment.

Sai tells Virat that one day he will have to accept the truth when she reveals the true faces of everyone at home.

© Copyright tellybest.com, 2020, 2021. All Rights Reserved. Unauthorized use and/or duplication of any material from tellybest.com without written permission is strictly prohibited.
Cached Saved on: Wednesday 1st of December 2021 03:06:53 PM