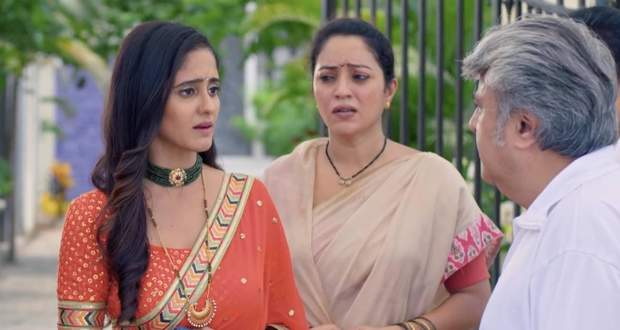 Today's Gum Hai Kisi Ke Pyaar Mein 16 April 2021 episode (GHKKPM) starts with Sai asking Ashwini to go home as if she waits there for feeding her the entire Chavan family will humiliate her for a lifetime.

Meanwhile, Pulkit and Devyani are happy being together and they give credit to Sai.

Sai creates a scene by calling the neighbors and local people around the Chavan’s mansion this makes Usha worried and she tries to stop Sai from acting weird.

At home, Ashwini talks to Virat furiously saying that being a policeman he has forgot his mother’s teachings and he should not have lashed out at Sai in the middle of the night.

Further, Sai gathers people around her and tells them that how the Chavan’s threw her out of the house as a reward for bringing together two people who love each other.

The local people get shocked knowing that the Chavan family lashed out at their daughter in law in the middle of the night for doing a good deed.

Later, Patralekha watches Sai creating a drama and inflaming the neighbors against the Chavan’s.

Patralekha rushes to tell it to Bhavani but Ashwini taunts her saying that she is always ready to inflame everyone against Sai.