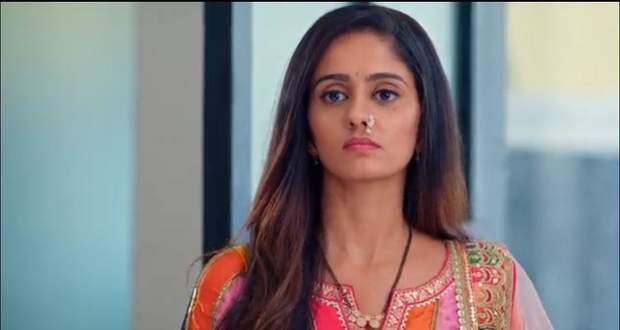 Today's Gum Hai Kisi Ke Pyaar Mein 18 February 2021 episode starts with Virat telling Pakhi that Sai thinks of them as lovers and that he is hiding his love.

Pakhi asks him if it is true while he denies and says that she is his brother's wife which angers Pakhi and she tells him that he forgot all his promises and further criticised his decision of marrying Sai.

She tells him that because of him, three lives are ruined and takes Sai and Samrat's name along with her.

Meanwhile, Bhavani tells family members to focus on their work while thinking that she will ruin Sai's life.

Sai reaches Pulkit's home but a lady named Madhuri opens the door and tells her that he has gone to pick up Harini from a friends house.

Sai comes inside and wonders the house in search of a family picture but fails.

Elsewhere, Mohit gives Karishma Samosa's amd tells her that he had gone to rehersal's instead of job interviews while she gets angry at him and berates him.

Sai thinks that Madhuri is Pulkit's wife and is about to go while Pulkit comes there and greets her.

He introduces Madhuri as his wife and Harini as his daughter which shocks Sai and she looks on.

Madhuri and Harini go while Sai confronts Pulkit and realises that he stayed in the Chavan house.

She thinks that he married another girl while Devyani is still waiting for him and goes.

Bhavanu is being served food while she asks about Pakhi.

Pakhi comes there and Bhavani tells her to give Virat food as he is in a bad mood.

Pakhi goes to him and tells him to eat while the plate falls and they argue.