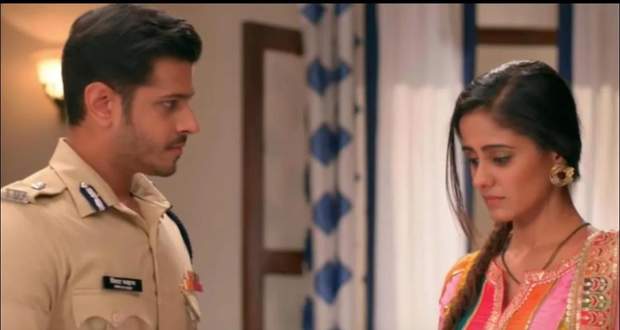 Ashwini asks of she ate while she says that she hasn't eaten anything while Ninad says that he will slap Ashwini if she supports Sai.

Sai confronts him while everyone starts taunting her.

Bhavani tells Sai that she should be grateful to them as she wouldn't go become a doctor if they would not pay her fees.

Sai says that she will give it to them once she gets a scholarship and tells Ashwini that she is hungry.

Pakhi comes there and stops everyone while she asks what was she doing at her professor's if she didn't have lunch which shocks everyone.

They are arguing while Virat comes there and announces that Sai will not be given food today.

Pakhi tells him to not promise anything he can't live up to and talks with him while Ashwini brings food for Sai.

Virat stops her which shocks everyone while Sai argues with him.

Sai tells him that she won't eat in the Chavan house and tells Usha to bring food from the nearby restaurant.

However, Virat stops her and says that the money is his and tells her that he will not let her spend it on food.

She brings out all the money from her purse and puts it in his hand while tells him that he was the one who gave it to her.