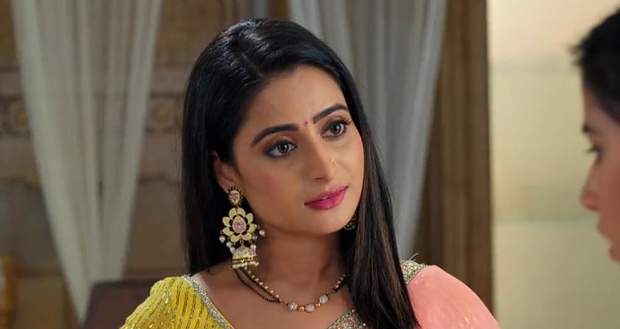 Today's Gum Hai Kisi Ke Pyaar Mein 19 January 2021 episode starts with Pakhi apologising to Sai in a taunting manner while Sai responds that she just stood there and watched all the drama happening.

Virat questions Pakhi if she watched it happen and then made a joke about it.

Sai promises them that she will leave only after doing the household chore from the next day and leaves without having breakfast.

Pakhi tries to incite Virat against her by speaking ill about her but Virat tells her that she shouldn't speak like that about Sai.

He further questions how they could let a girl stop eating while Pakhi talks back to him.

Elsewhere, Sai collides with a man apologises to him.

He introduces himself as Pulkit Deshpandey and they talk about her studies.

Sai tells him about her father, husband and family and they share an emotional moment.

Later, Karishma goes to Pakhi's room and shows her gratitude for supporting her in the morning against Sai.

Pakhi asks her if what Sai said in the morning is true or not and she delines but Pakhi tells her that she knows her nature.

Karishma tells her that they should team up to teach Sai a lesson and she agrees.

Usha comes there and realises that Sai has a fever and tells her to eat but she refuses.

She tries to convince her to eat but Sai says that she will not eat while Virat comes there.

Sha informs Virat that she is refusing to eat and has a fever while leaving.

Sai tries to leave but Virat holds her hand and stops her.

Virat tells jer to eat the medicine while she says that she will never understand him.

Virat tells that he did not like the way she talked to Amay.

Sai responds that she wasn't flirting with Amay amd tells him that he can flirt with other girls and she knows that their marriage is a deal.

© Copyright tellybest.com, 2020, 2021. All Rights Reserved. Unauthorized use and/or duplication of any material from tellybest.com without written permission is strictly prohibited.
Cached Saved on: Tuesday 21st of September 2021 05:49:35 AM