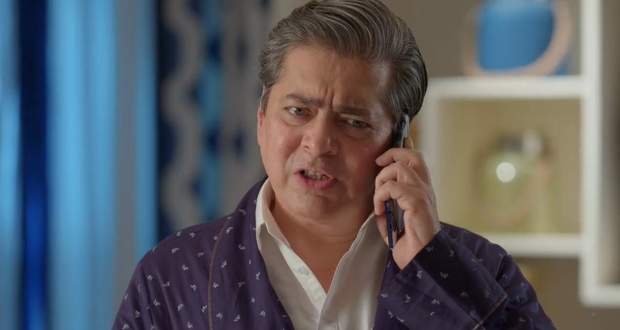 Bhavani comes there and taunts Shivani for it.

The tarot card reading continues and Shivani says that it is a strength card but it is revealed that it is the hanged man card.

Elsewhere, Virat gets a call from Ninad and the former inquires about Samrat due to which Ninad asks him who revealed to him about Samrat being MIA.

Virat further dejectedly tells him about Kamal's demise and his promise to Kamal.

Ninad advises him to keep his promise and to do the right thing.

Doctors informed him that Sai is stable now and to meet her one by one.

Meanwhile, Mohit is flirting with Karishma while she finds out from a picture that the tarot card read The Hanged Man.

She reveals the same to Mohit.

At the hospital, Virat is removing blood from Sai's forehead while she regains consciousness and they converse.

Sai coughs and Virat helps her with water after which he tells her that Kamal wanted her to be happy.

He tries to motivate her saying that he wants her to become very successful in future.

Sai insists him to back to Nagpur while he stands his ground that he will after she is discharged.

Virat lastly tells her that he won't come to the hospital tomorrow but to call him if she needs anything after which he leaves.

© Copyright tellybest.com, 2020, 2021. All Rights Reserved. Unauthorized use and/or duplication of any material from tellybest.com without written permission is strictly prohibited.
Cached Saved on: Sunday 9th of May 2021 09:57:51 PM