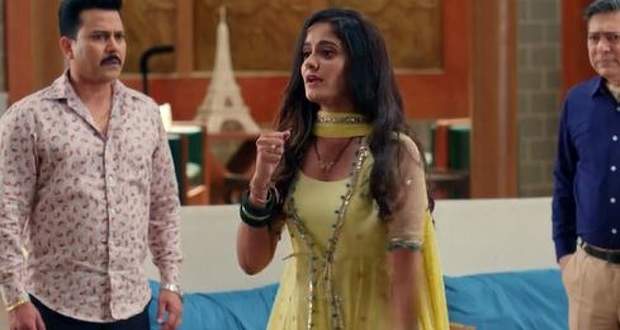 Patrlekha says that if Sai can study after getting married, then why can't she work.

Bhavani agrees with Patrlekha's decision. Ninadh and the remaining family speak badly about Sai. Ashwini and Bhavani start arguing about Patrlekha and Sai.

Virat and Sai return home happily while everyone scolds Virat. Sai asks them what is wrong with spending some time with her husband.

Ninadh yells at her and Sai bursts out in anger.

She makes fun of them and Virat smiles at her but everyone fumes with anger. Devi enters the hall and enjoys it. Bhavani scolds her and asks her to leave.

Ninadh yells at Virat that he is enjoying with Sai instead of going to his duty to find Samrat. Ashwini tries to explain that Sai is innocent but Bhavani shuts her mouth.

Sai says why they ask Virat so many questions instead of asking her about the admission. She says that Chawan's mansion is like a Jail to her and leaves.

Patrlekha taunts Virat and says him to arrange a house for Sai.

© Copyright tellybest.com, 2020, 2021. All Rights Reserved. Unauthorized use and/or duplication of any material from tellybest.com without written permission is strictly prohibited.
Cached Saved on: Tuesday 8th of June 2021 10:34:26 PMCached Disp on: Wednesday 16th of June 2021 07:35:48 AM