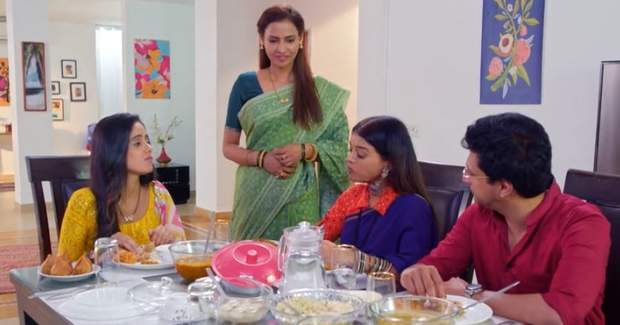 Today's Gum Hai Kisi Ke Pyaar Mein (GHKKPM) 1 May 2021 episode starts with Sai comforting Devyani by saying that Harini will soon accept her as her mother and join her for having lunch together.

Meanwhile, Pulkit tries to console Sai by taking Virat's side and asking her to forgive him once.

Later, Sai gets a message from Mohit saying that Virat has gone on a dangerous mission and she should pray for his well-being.

Sai gets emotional and tries to hide her feelings from everyone.

Further, Virat leads his team and enters the war zone and begins with his mission.

Everyone gets worried as they see Virat on TV fighting with the terrorists.

Ashwini scolds Patralekha for calling Virat in the middle of his mission and tells her to behave wisely.

Sai gets worried as she sees Virat on TV and she feels guilty that she didn't receive his call.

© Copyright tellybest.com, 2020, 2021. All Rights Reserved. Unauthorized use and/or duplication of any material from tellybest.com without written permission is strictly prohibited.
Cached Saved on: Sunday 2nd of October 2022 04:10:24 PMCached Disp on: Friday 7th of October 2022 02:12:49 PM