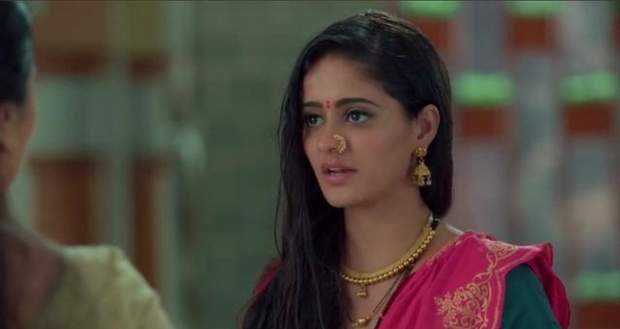 Today's Gum Hai Kisi Ke Pyaar Mein 20 January 2021 episode starts with Sai telling Virat that their marriage is a deal and reminds him that she won't be staying here long.

Sai tells him that his loyalty changes from time to time because he sometimes scolds her and sometimes supports her.

He responds that he only scolds her when she is going something wrong like flirting with Amay and bringing him to their house.

Later, Virat asks her if she at eat to which she says no. Virat says that he also didn't eat and decide to eat together.

He checks her fever and sees that it is high after which he tells her to not do the household work the next day as he will inform everyone about it.

The next morning, Bhavani comes to the kitchen and wonders why Ashwini is not there.

Sonali makes fun of Sai while Bhavani and Karishma join her.

Usha comes there and tells them that Sai can't work as she has a fever.

Bhavanu insults her and throws a cloth at her and tells her to clean the whole house.

Later, Sai comes downstairs and tells Usha to ask Bhavani what work she has to do.

Pakhi taunts her and tells her that she should do the work as a responsibility and not as a chore.

Bhavanu tells her to cook for the whole house and Ninad gives her a huge menu to make.

Sai says that she will need help in chopping the vegetables and preparing for the lunch while saying Bhavani and Sonali don't know how to cook as she has never seen them cook.

She says that Karishma and Pakhi are left after which she tells Karishma will do the chopping while Pakhi will make a grind the spices.