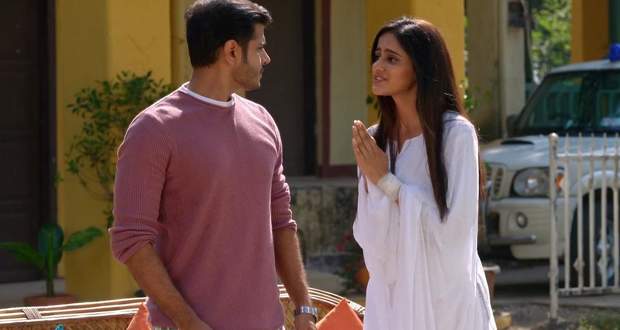 Milind and others come there and inform Usha that Virat has agreed to the marriage.

Usha gets worried about Sai's answer while she comes there and berates them for thinking about her marriage.

Usha and Sai argue while Usha screams at her to marry Virat after which the latter runs away.

Elsewhere, Virat is inquiring about Samrat from Brigadier Sood while Sai comes there.

She confronts him and begs him to say no to the marriage while he says that he's just keeping his promise to Kamal.

She tells him that he saved her two times and to save her a third time by disagreeing with this marriage.

She brings put the topic of Pakhi due to which Virat gets shocked and then tells her to not expect anything of him as he has already promised someone to love her only.

Virat gets a call from Usha worrying about Sai after which he tells her that Sai is with him and that he'll bring her home.

Sai says that she'll go by herself but he tells her to get in the car and they leave for her home.

Sai asks him what he will tell Pakhi to which he tries to change the topic but fails. He tells her to not expect anything of him to which she replies with the same answer.

Virat tells her that she can leave the marriage after she becomes a doctor.

© Copyright tellybest.com, 2020, 2021. All Rights Reserved. Unauthorized use and/or duplication of any material from tellybest.com without written permission is strictly prohibited.
Cached Saved on: Friday 6th of August 2021 03:26:18 AM