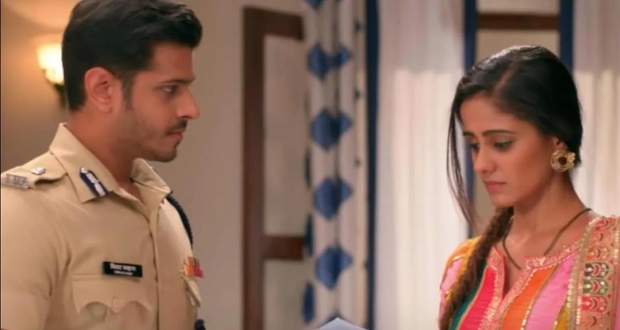 Virat overhears them and requests Usha to go outside and she goes.

Virat holds Sai's wrist and asks her why she is going while Sai tells him that he might break her hand as he had handled it two times.

He asks her if she is just while she shows him her bruised wrists after which he tries to apply ointment on it.

However, Sai pulls back her hand and tells him that she can't live in a house where his father and his teachings are not respected.

Virat apologises to her while Sai says that he shows his true nature which is frightening.

He reveals to her that he was hurt as he had made plans for them to go out for lunch and eat together and tells her that she means a lot to him.

He tells her that he is ready to apologise in front of everyone and that he genuinely wanted her to spend time with him.

Meanwhile, Usha goes to give the plate to Mohit while Karishma talks rudely with her and fights with Mohit.

Virat joins his hands and apologies to Sai while she crying saying that he hold her hand so tightly.

He reveals that he didn't eat anything while she asks him if Ashwini or Pakhi didn't ask him for food.

He says that he had a fight with both of them and tells Sai to think of him as her family while crying.

She makes him promise to never stop anyone from earing after which he pats her head.

Virat plans to surprise her as they wipe each other tears.

Later, Virat brings food and cotton candy for Sai but she is asleep.

He breaks off a piece of the candy and puts it in her mouth to wake her up.

© Copyright tellybest.com, 2020, 2021. All Rights Reserved. Unauthorized use and/or duplication of any material from tellybest.com without written permission is strictly prohibited.
Cached Saved on: Monday 10th of May 2021 04:11:05 AM