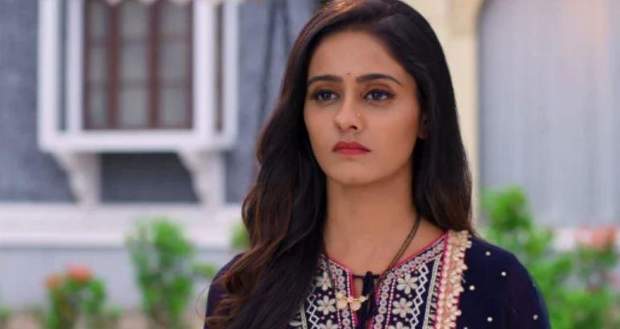 Ashwini comes into the room and consoles Sai and tells her to stay away from Pulkit’s matter.

Bhavani, Ninad, and Omkar celebrate their success as their plan gets successful against Sai.

Sai from far away apologizes to Devyani and says when Virat comes back he will find the truth behind Pulkit’s case.

Meanwhile, Pulkit risks his life and somehow manages to get his mobile to him. He checks his mobile and finds the messages sent from his number to Sai.

Pulkit’s doubt turns into reality as he comes to know that the culprits behind his kidnapping are the Chavan’s.

Pulkit records a video message and sends it to Sai.

A gang member sees Pulkit’s mobile with him and informs Daadu.

Daadu snatches it from Pulkit and sees that he has sent a video message to Sai. He informs Ninad.

Sai sees the video message and rushes to tell Bhavani that Pulkit is in danger.

Sai overhears Bhavani, Ninad, and Omkar’s conversation and finds out that they are the real culprits behind the crime.

Bhavani gets worried and goes to Sai’s room to check whether she has seen the videos.

Bhavani doesn’t find Sai in her room and she thinks maybe she went to Ashwini to show her the video.

Upcoming Gum Hai KisiKe Pyaar Mein (GHKPM) (tomorrow) episode update: Sai says to Bhavani that she has found out Pulkit's truth as he has sent her a message.

© Copyright tellybest.com, 2020, 2021. All Rights Reserved. Unauthorized use and/or duplication of any material from tellybest.com without written permission is strictly prohibited.
Cached Saved on: Tuesday 27th of July 2021 10:12:41 PMCached Disp on: Wednesday 4th of August 2021 05:29:37 AM