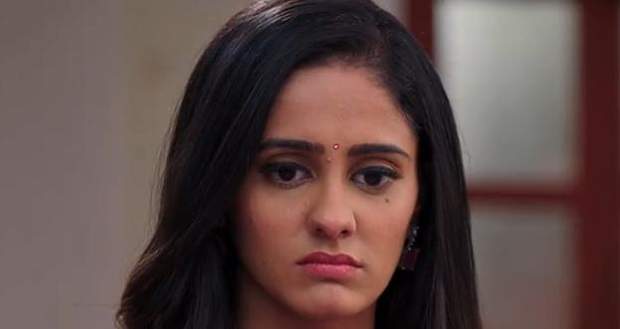 Today's Gum Hai Kisi Ke Pyaar Mein 25 February 2021 episode starts with Sai saying that there kd nothing wrong if a husband goes with her wife while Bhavani accuses her of insulting her.

Virat tells Sai to control her anger while Ninad says that they have decided that none of them is going with her.

Sonali tells Sai has to leave the house. Virat tells them he will leave this house with Sai if this is everyone’s final decision.

Ninad rebukes him saying how could he even think of it while Virat responds that they have left him no choice saying that if Sai leaves then we will leave with her.

Pakhi says to let her go to her house while Mohit says that the is the one who made this whole thing a big deal while Sonali tells him to go to his room.

Ashwini tries to convince Sai to stay while Sai reveals that they all have been making her feel the worst since she came here.

Sai tells that she is leaving this house for forever and removing all the troubles of this house.

Virat leaves for the temple with Sai while Vaishali comes and greets everyone.

Bhavani tells her that she can take Pakhi some other day as today is Mahashivratri.

Sai grabs onto Virat after getting scared due to the tyre puncturing.

Virat goes to look for a mechanic while Sai notes Pulkit as he comes towards her and asks her why she left without having lunch.

Madhuri calls him brother while Harini calls him father to which Sai understands the situation and wonders who is Harini's mother.

She asks her who is his wife if he wants to come to her house and Pulkit takes Devyani's name shocking Sai.

© Copyright tellybest.com, 2020, 2021. All Rights Reserved. Unauthorized use and/or duplication of any material from tellybest.com without written permission is strictly prohibited.
Cached Saved on: Tuesday 20th of April 2021 07:40:12 PM