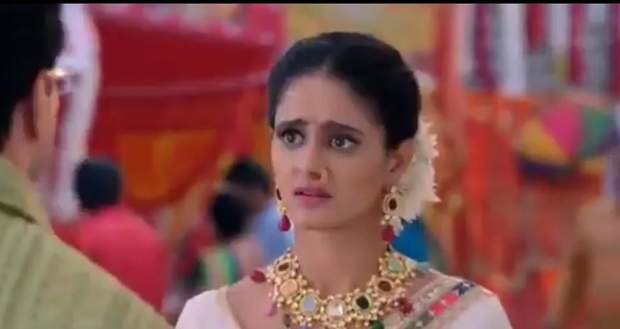 Pulkit reveals to her that Madhuri is like her sister and that Harini calls her Ma as in short of Madhuri.

Sai thinks about that lies told to Devyani and reveals that she talks about her child while Pulkit reveals that Harini is his and Devyani's daughter.

Sai reveals to him that Devyani is mentally unstable while Pulkit says that he will accept her no matter what.

Sai wonders how Devyani turn out like this while Pulkit says that a lot happened to them and requests her to invite him today only.

Meanwhile, Mohit comes in the disguise of Sadhu to the Chavan house while Bhavani touches his legs and takes his blessing.

He says that he is here to give blessings to youngers and advice to the elders.

He says that he hears the taunts they tell to dreamers of their house while Pakhi asks him who he is.

He slips from his acting and Sonali removes his fake moustache and beard to reveal Mohit.

Bhavanu surprisingly praises his acting skills but tells him that his acting won't fill his and his wife's hunger.

Later, Bhavani locks Devyani in her room while Ninad tells her to not worry about the secret.

Elsewhere, Madhuri comes to Pulkit telling him that Harini is being stubborn.

Pulkit goes while Sai apologises to Madhuri and goes as Virat comes there.

Bhavanu feels worried while Omkar amd Ninad tries to pacify her that they are with her.