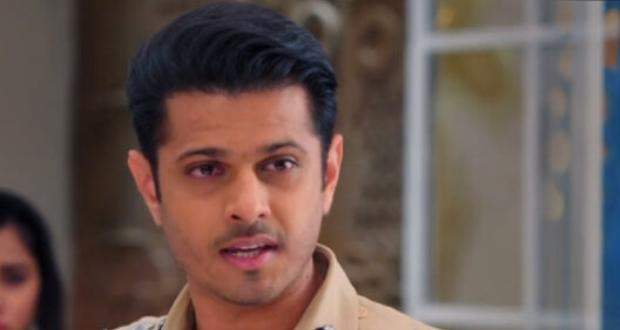 Today's Gum Hai Kisi Ke Pyaar Mein 26 March 2021 episode (GHKKPM) starts with Sai calling Madhuri and revealing to her that Pulkit is kidnapped and is trapped in a jungle.

Madhuri gets emotional while Sai tells her that they will rescue Pulkit by themselves and forms a plan.

Elsewhere, Bhavani tells Ninad and Omkar that she will have to keep Pulkit kidnapped for a few more days to make it look more convincable.

Omakr and Ninad are regarding Sai's intentions while Bhavani voices her suspicion that Sai has seen the video's sent by Pulkit and is tricking them but Ninad tells her to be positive and to get rest.

Later, Sai tells Madhuri to stay confident and to introduce herself as her college friend Neha who has came home to take notes.

Bhavani is in her room while a paper wrapped around a rock is thrown into her room through the window breaking it.

She reads the letter which says that it is written by the kidnapper who is demanding 1 crore.

Madhuri climbs the balcony to and calls Sai from Usha's phone while keeping it near the window and leaves.

Bhavanu tells Ninad and Omkar about everything about their plan in detail while Sai is overheating their conversation.

She gets a call from Virat and thinks to put the call on conference but doesn't pick up the call.

Bhavani tells Onkar and Ninad to go to the kidnapper and get the deal done by giving him the remaining 2.5 lakhs.

Ashwini gets a call from Virat and he tells her that Sai didn't pick up her phone.

Sai is packing her purse while Ashwini comes to her room and video calls Virat from her phone while giving the phone to Sai.

Madhuri is following Ninad and calls Sai while Sai sees her call but is unable to answer it due to talking to Virat.