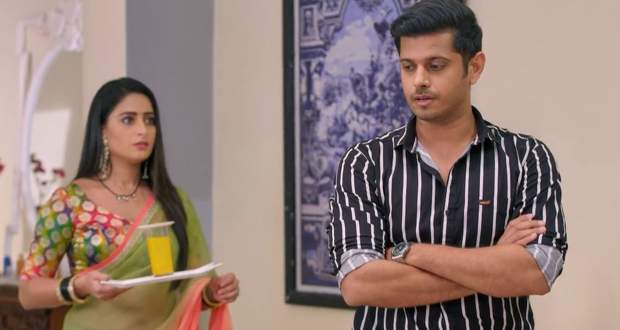 Today's Gum Hai Kisi Ke Pyaar Mein 27 April 2021 episode (GHKKPM) starts with Sai telling Barkha that Virat doesn’t love her and he loves someone else. So, he won’t miss her.

Later, Patralekha comes to Virat’s room and asks him why is he caring so much for Sai as she has no emotions and refused to come back to him.

Patralekha and Virat get into a heated argument as she reminds him about the promise he gave her.

Further, Pakhi gets shattered when Virat confesses that he has fallen in love with Sai.

Patralekha gets heartbroken and tells Virat that she married Samarth only on his commitment that he will never give her place to anyone else.

Virat instructs Patralekha to come into his room only when she has any work for him.

Meanwhile, Patralekha demands answers from Virat for choosing Sai over her which makes Virat furious and he tells Patralekha to leave the room.

© Copyright tellybest.com, 2020, 2021. All Rights Reserved. Unauthorized use and/or duplication of any material from tellybest.com without written permission is strictly prohibited.
Cached Saved on: Sunday 9th of May 2021 02:59:54 AM